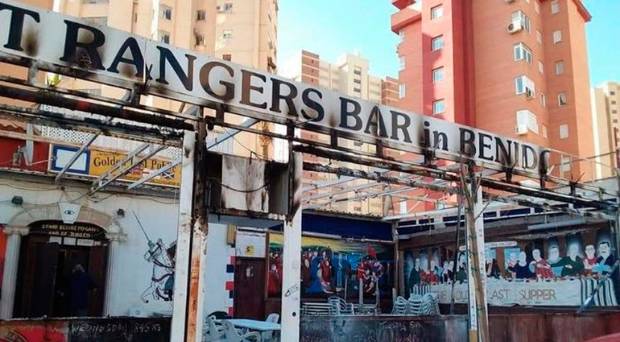 The Rangers bar in Benidorm where flags were set on fire

A DERRY family have spoken of their fears while on holiday in Spain when flags outside a Rangers supporters bar in a seaside resort were torched.

The incident happened as several thousand Celtic fans descended on the Costa Blanca for a crucial Europa League match against Valencia.

The Glasgow side face an uphill battle after losing 2-0 in the first leg at home in Celtic Park.

Flags at The Golden Last pub, said to be the first Rangers bar in Benidorm, were set on fire in the early hours of Wednesday morning, causing damage to the frontage of the popular pub.

Scorch marks were visible on the front of the bar, which often flies Union flags and Ulster banners outside.

Staff at the bar have said the bar remains open, with no damage inside.

More than 10,000 Celtic fans are thought to be making their way to the Costa Blanca for tonight’s Europa League showdown at the Mestalla Stadium (kick off 5.55 pm).

But with a ticket allocation of just 2,500, the majority will be watching the game in pubs and bars in towns such as Benidorm and Alicante.

A group of Celtic fans who were on the flight from Belfast International Airport to Alicante on Tuesday evening, and others on their way to Benidorm left some passengers feeling threatened.

Among them was Debbie Ramsey from Derry, who said everyone in her group has been warned against going to the Levante Beach Boulevard known as ‘the Strip’ or wearing their Northern Ireland football tops.

She told the Belfast Telegraph: “On the flight to Alicante, there were a large group of Celtic supporters singing anti-British soldier songs which made us feel very uncomfortable.

“They took a long time to stop after they were asked to.

“But on the coach from Alicante to Benidorm there was another group and they were singing pro-IRA songs which I thought was disgraceful.”

Ms Ramsey said she was in her hotel yesterday when she heard that the Rangers bar had been attacked and the flags burned.

“We have also been advised not to let the young girls in our group who are aged between 18 and 20 to go to the strip on their own in case things kick off again and to be careful not to wear football tops.

“It is ridiculous that we have to tell the children not to wear their football tops on holiday and that we can’t go to the Northern Ireland supporters bar in case these Celtic fans are offended.”

Derry family left in fear after flags torched at Rangers bar in Spain was last modified: February 22nd, 2019 by John