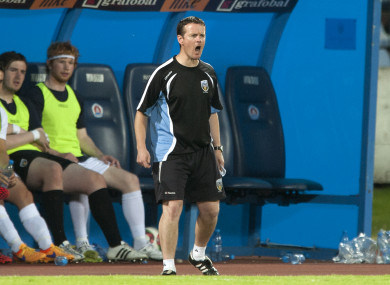 Devine will have a fully fit squad, except the services of youth-team player Evan Tweed, at his disposal as he looks to lay down a marker on the Lonemoor Road.

“We are people who have to fight and that’s the Derry mentality. We’re not going to be intimidated in our own backyard anymore,” Devine said.

“This club means a lot to the people of this city and we’re in a privileged position of representing them.

“We have to get back to what the people of this community have had to do all their lives and that’s fight for everything.”

However, UDC manager Collie O’Neill expects the Candystripes to be at their very best in front of a packed Brandywell Stadium.

He said: “We know it is going to be a tough test up there. However, at this level, every game is going to be difficult, and we are going to have to be at our best if we are to have a chance of coming away with a result.

‘We will be looking to go out and play the way we know we can play, on a good surface in a great new stadium and start showing everyone what we can do at this level.”

Greg Sloggett will get his Derry City career off against his former side, while they were dealt a big blow to his preparations for the new season on Monday night in training, as Evan Osam went down when dribbling with the ball.

Tests revealed a rupture of his Achilles tendon and he underwent surgery on Tuesday and looks set to miss the majority of the season.

Meanwhile, Michael McCrudden, who completed his move to Derry City yesterday is expected to be involved in Devine’s plans ahead of tonight’s league opener.

‘We are going to have to be at our very best’ – UCD boss Collie O’Neill was last modified: February 15th, 2019 by Shaun Keenan