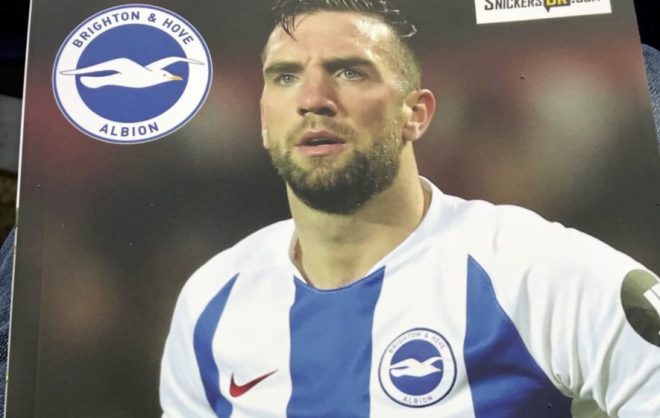 DERRY born defender Shane Duffy has been likened by his club in the south of England as its version of the ‘Backstop’.

In a light-hearted poem to Brexit, an image of defender Duffy above the caption ‘The Irish backstop’ adorned the front cover of Brighton and Hove Albion FC’s official match day programme on Saturday.

Duffy, a bulwark for Brighton and the Republic of Ireland, scored his side’s only goal as they lost 3-1 at home to fellow Premier League strugglers Burnley in a vital bottom of the table clash.

The defeat has left Brighton just three points off the relegation zone.

The Seagulls now sit on 27 points with just 12 games of the Premier League season remaining.

After Saturday’s game, Duffy tweeted: “Disappointed and gutted how tonight went. We’re much better than what we’re showing at the minute.

“It’s down to us to put it right! Bad patch we’re on at minute but we will get through it! Keep the faith!!”

The Derry man has become a lynchpin of the Republic’s back four after switching allegiance from Northern Ireland, for whom he played at youth level.

In 2010 he had life-saving surgery after a freak accident during a training match while with the Republic squad.

The centre-back lacerated his liver and lost more than three litres of blood after colliding with goalkeeper Adrian Walsh.

He has since been capped 25 times for the Republic’s senior team and featured in the side’s adventures at Euro 2016.