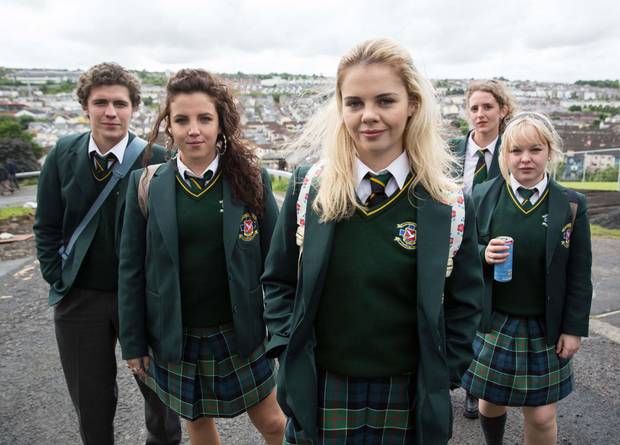 Another win for Derry Girls in Broadcast Awards

This is just one more accolade for the hit series, which has previously won the Radio Times Comedy Champion Award and an IFTA.

Members of the Derry Girls cast, including Nicola Coughlan, Dylan Llewellyn and writer Lisa McGee were out at the hotly-anticipated Broadcast Awards last night to celebrate their win.

The Broadcast judges noted: “Channel 4 started 2018 with a bang thanks to Derry Girls. Lisa McGee’s gang comedy, set in an all-too-real early 1990s Northern Ireland and following the escapades of four teenage girls and a ‘wee English fella’, was a resounding success.

“Reeling in an average of 3 million viewers across its six-part run, it became C4’s biggest new comedy since 2012’s Derek.”

The judges added: “Viewers were drawn in by its authentic depiction of what everyday life was like for youngsters against a backdrop of army checkpoints and bomb threats. But the clincher was its cast of larger-than-life characters, ably led by breakout star Saoirse-Monica Jackson, with support from Kevin McAleer and Peter Campion.”

Derry Girls fans won’t have long to wait for the second series, which is expected to air on Channel 4 later this year.

Another win for Derry Girls in Broadcast Awards was last modified: February 9th, 2019 by Rachel