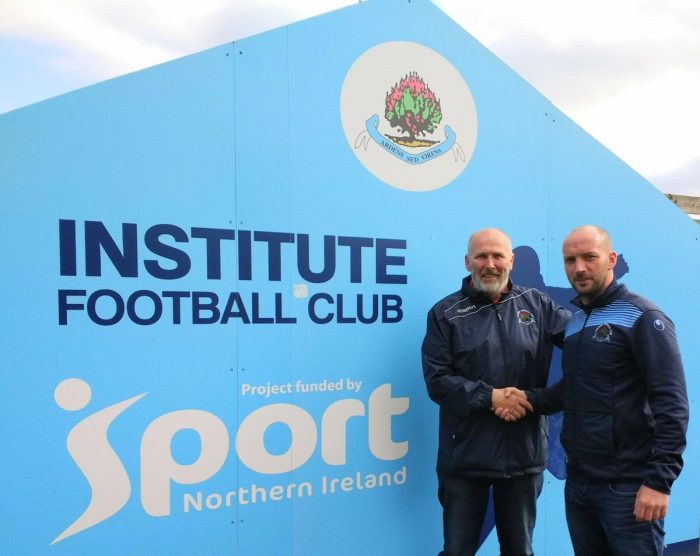 Institute FC appointed Paddy McLaughlin as its new manager in May 2017. Now he is heading to Cliftonville

PADDY McLaughlin is on his way out of Institute FC and heading to north Belfast to become Cliftonville’s new manager.

The 39-year-old is poised to be announced as Barry Gray’s successor after Institute confirmed the resignations of their boss and two of his backroom team.

Coaches Brian Donaghy and Conleth McCrudden have left the north west club along with the manager ahead of Cliftonville’s unveiling at 5pm.

“The club would like to thank Paddy for his dedication, hard work and achievements as a Stute player and manager. We wish him, Brian and Conleth well in the challenges that lie ahead for them,” said the Stute statement.

“The club will be consulting with our players over the next few days to reach a concensus on the best way forward.”

A fourth candidate, Dave Rogers – whose most recent employment was with DSK Shivajians in the Indian I-League – was always an outsider and was, over the weekend, understood to be no longer in contention.

McLaughlin will oversee training for the first time tomorrow night before taking charge of Cliftonville’s Premiership encounter with Newry City on Saturday.

He will be handed a further opportunity to run the rule over his squad when the Reds host Longford Town in a friendly on February 16.

Creggan man McLaughlin has won admirers across the Irish League for the manner in which he guided Institute to last year’s Bluefin Sport Championship crown against the backdrop of devastating floods that left the club with neither a home ground nor training facilities.

There is a certain irony to his impending appointment given it was a 6-4 defeat to Stute just before Christmas that sent the Reds into the tailspin that eventually led to Gray’s departure.

McLaughlin will link up with former Stute midfielders Aaron Harkin and Niall Grace, both of whom joined Cliftonville on transfer deadline day.

Harkin had already signed a pre-contract agreement at Solitude before his move was accelerated while Grace arrived on loan from Glenavon, where he has struggled for regular starts since his summer transfer.

Reds fans will now no doubt have their eye on Stute’s star marksman Michael McCrudden.

The 27-year-old is staying at his current club until the end of the season but with his contract set to expire, hopes will be high that McLaughlin can help tempt the league’s joint top-scorer to form a deadly strike partnership with Joe Gormley – the only other man to boast 19 Premiership goals this term.

With their Irish Cup hopes having also been ended by the Swifts a fortnight earlier, Cliftonville’s season now rests on securing European qualification through the play-offs – and that will be the first target Lawlor will set for McLaughlin.

Legendary former boss Tommy Breslin, whom many fans had hoped could be enticed back to the club he led to two Premiership titles, was part of the panel that conducted interviews for the role.

Independent advisor Dr Leslie Caul — who acted as chairman of the Irish FA’s Executive Board for five years — was also involved in the process when McLaughlin, Shiels and Feeney were quizzed on Saturday.

Vastly experienced Shiels led Derry City to the EA Sports Cup last season and was at Solitude to cast his eye over the Reds’ 1-1 draw with Glenavon last month.

The 62-year-old boasts arguably the most impressive CV of the three interviewees, having also taken charge of Northern Ireland’s under-17s and Tranmere Rovers’ youth set-up before enjoying Scottish League Cup success with Kilmarnock in 2012.