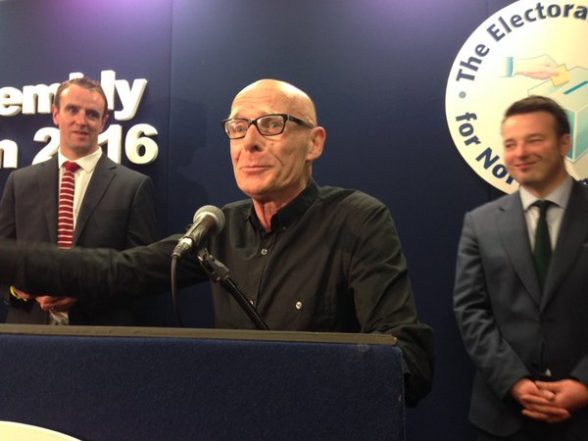 Eamonn McCann to run in Derry council elections this May TRADE unionist Eamonn McCann is to stand for People Before Profit in the Moor District Electoral Area in the council elections this May.

It’s the first time since 2005 that the civil rights veteran campaigner has contested a local Council election.

The Moor DEA covers the Bogside, Creggan and Brandywell areas.

Mr. McCann said: “People Before Profit is standing in the May 2 election to give a voice to those hit hardest by welfare reforms, cuts in services, low pay and poor housing – and a political system which gives priority to differences between the communities rather than the gap between the rich and the rest of us.

“Councils have limited powers. But council members can help organise resistance to austerity in communities, work-places and colleges and add weight to campaigns for equality in all aspects of life.

“Fifty years after the civil rights movement, Derry still lags behind in terms of decent jobs, public investment, educational provision, air quality and much else.

“Once, we could blame these ills on the bias and bad faith of the Unionist establishment. But it’s decades since Unionists ruled the roost in Derry.”

The Derry civil rights campaigner said Derry’s economic deprivation levels could not longer be blamed on the majority-rule exercised from Stormont 50 years ago.

“Socialists were in the forefront of the mass movement which did away with the most glaring aspects of sectarianism.

“Since then, Derry and Strabane have had majority Nationalist councils and a majority of Nationalist representatives at Stormont and Westminster, including Ministers, Deputy First Ministers, committee chairs, a clatter of Spads, etc., etc.

“If Unionists were to blame in the past, who’s to blame now? “Thousands of local people live an inch away from the breadline.

“Yet Sinn Féin, the DUP and Alliance walked through the lobbies to vote the Tory austerity measures through.

“We will use seats on the council for the opposite reason – to help build active opposition to the Tory assaults on working-class living standards endorsed by the DUP, Sinn Féin and Alliance.

“The Unionist and Nationalist parties have failed to deliver on promises of a major expansion of Magee.

“We will fight hard to make up the ground lost by the main parties – and will also demand that the council commissions a formal audit of the idea of a separate Derry university.

“We will fight to ensure we make our contribution to combating climate change, through factoring in environmental concerns at the outset of major projects in our area. We want all council planning meetings held in public.

“We will demand transparency in the allocation of money to community and arts organisations.

“We will make a difference,” added Mr McCann.