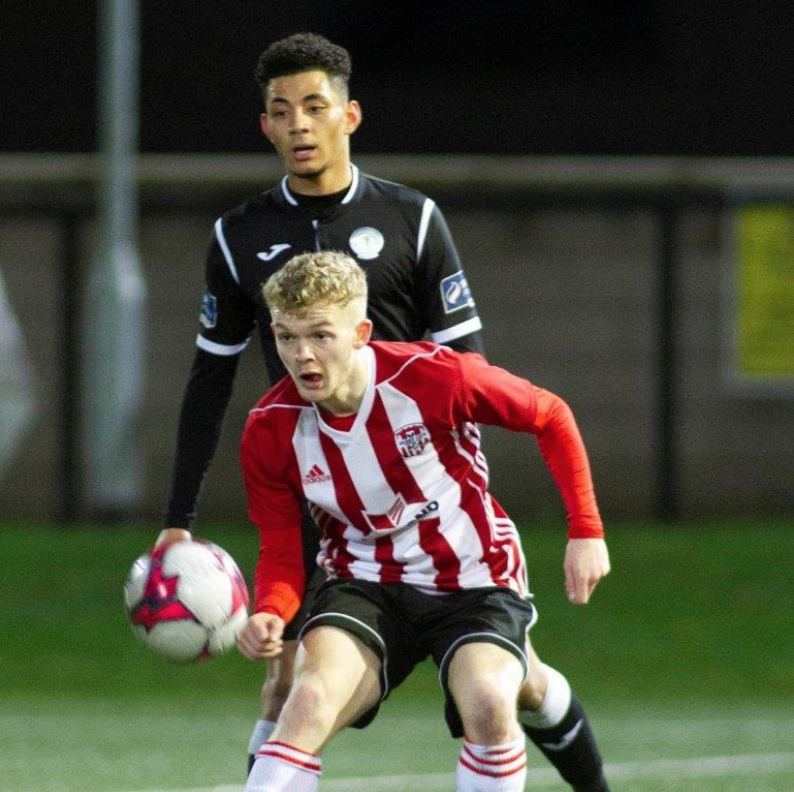 Three thrilling first-half goal from Adrian Delap, Eoin Toal and Patrick McClean was enough to put an end to any desire Harps showed following the interval.

The occasion may have been scheduled to be a pre-season friendly but the fixture started like we were well into the 2019 SSE Airtricity season.

Caught on their heels, Adrian Delap, from Ray, gave the Candystripes the lead after two minutes, showing real composure in front of goal to slot past Peter Burke.

Harps were caught on the backfoot and Derry made sure to punish them. Declan Devine’s side were playing some slick interlinking football to the satisfaction of the City faithful in the opening stages – A taste for what is yet to come perhaps.

Midway through the second half, the Lone Moor Road side doubled the scoreline from a set-piece.

Barry McNamee delivered an excellent ball into the danger area, with Patrick McClean looming large at the back post before Eoin Toal nodded home from close range.

Just before half-time, the visitors had a huge chance to pull one back.

Mikey Place did brilliantly to shuffle past McClean before pulling one back for Sam Verdon, who was less than 12-yards out, but Peter Cherrie superbly parried it away for a corner kick.

The darting pace of City was clear and they stretched their lead even further from another set-piece.

McNamee, one of the oldest in the team at the age of 26, was the provider once again and he excellently opened it up for the undeterred McClean, who showed great desire to rise high and sink Harps once and for all before the interval.

In the second half, Derry City started like a flash, again, and they really should have scored their fourth when David Parkhouse showed his robust pace.

The sturdy number nine infiltrated the Ballybofey’s sides defence, particularly Daniel O’Reilly, before placing a sharp ball to Toal at the back post but the defender, who had an exceptional display at right-back, failed to pull the trigger.

There were signs of improvement in the second period for Horgan’s outfit who saw O’Reilly fire just wide from 20-yards.

After the hour mark, Mikey Place also caused danger for Harps, hitting an awkward one towards the indomitable Cherrie.

It was explicit that the Foylesiders had taken their foot off the gas, making several changes, gifting Harps more possession.

The introduction of Tony McNamee to the fold was a positive one for Harps and a splendid long throw-in into the area almost was paid dividends with Niall McGinley lurking at the back post, but who else other than Ciaran Coll was there to clear the threat.

Towards the end, the North West friendly that started with some terrific football from Decky Devine’s fresh Derry City squad, ended exactly how you’d expect a friendly to end: laboured, sloppy and slow.

Despite all of this, Derry City were impressive nonetheless and they now head to the Isle of Man full of confidence.

Finn Harps have much work to do, starting against Drogheda United on February 2.

Finn Harps slumped to a 3-0 thrashing against a new-look Derry City at the Ryan McBride Brandywell Stadium on Friday.