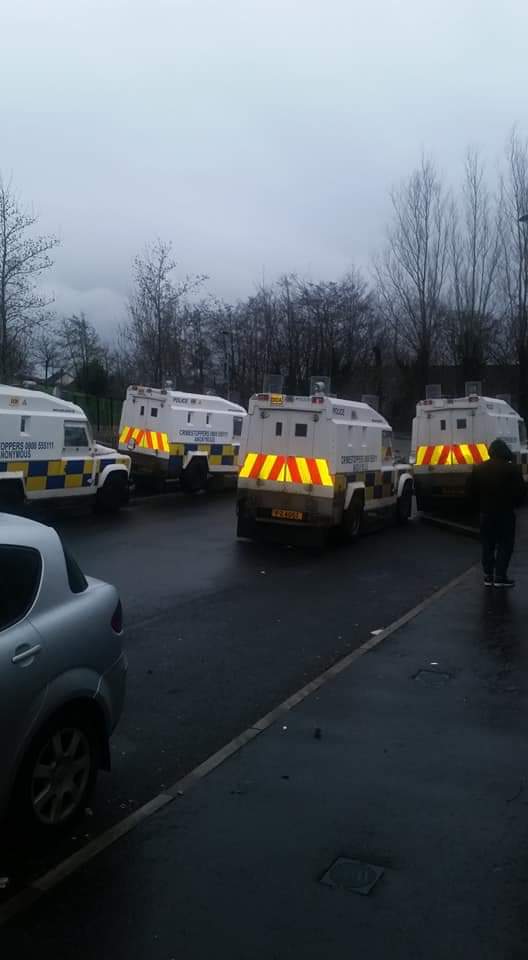 A large number of police landrovers have descended on Creggan as part of the investigation into Saturday night’s bomb attack at the Derry courthouse in Bishop Street.

Saoradh, the political wing of the ‘New IRA’ believed to have carried out the bomb attack, has tweeted this morning: “Just hours after Revolutionary Republicans launched an attack on the British courthouse Derry, the RUC/PSNI Crown Forces have saturated Creggan to raid homes and sieze Republicans.

“We hope these lads are home soon.”

Saoradh also claimed that the device used in Saturday night’s attack was a “large mine”.

The group said: “Early reports from the city of Derry are indicating that a British institution in the form of Derry City Courthouse has been attacked this evening in what is believed to have been a large mine attack by republican revolutionaries.

“Reports from the city say that a car filled with explosives, planted outside the British court, exploded as Crown Force personnel attended the scene,” it added.

In its statement the organisation did not condemn the suspected car bomb but instead stated:

“This attack comes on the eve of the centenary of the Soloheadbeg ambush where Seán Treacy and his comrades struck a historic blow against the Crown Forces in Tipperary, it seems 100 years later Volunteer Seán Treacy’s comrades continue the unfinished revolution.” Forensic officers move in as part of search operation in Creggan