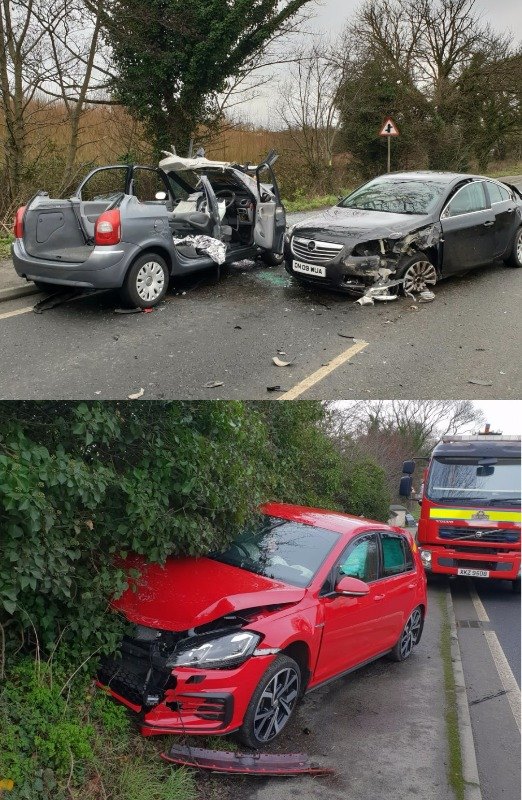 TWO people have been arrested following a four-vehicle crash in Londonderry.

A postal van and three cars were involved in the collision along the Buncrana Road on Friday morning.

One man had to be removed from one of the vehicles by the Fire Service.

Police arrested two men aged 27 and 22 in relation to the incident and they are both currently being held in custody.

The road has now been reopened to traffic and any witnesses have been asked to come forward.

Two people were taken by ambulance to Altnagelvin Hospital for treatment.

PSNI Foyle say on its Facebook page: “At around 11:35am today on the Buncrana Road near the Benview Estate, four vehicles were involved in a collision.

“The drivers of two of the vehicles involved ran off from the scene leaving that devastation in their wake.

“A number of people came forward to police at the time about what they saw and as a direct result of this, we arrested two males shortly after away from the scene.

“They are currently in custody but this is where the hard work begins in getting a conviction.

“Thankfully a number of people did stop to help the people they left behind, including a St Johns Ambulance crew who were on scene when it happened and got to work straight away.

“Police would like to thank the many people who did stop to pick up the pieces, especially the taxi driver who stayed behind just to make sure people had some where warm to sit while emergency services did their work.

“NIAS and NIFRS were on scene quickly and able to get the two remaining drivers to hospital. Once again, the kindness of the public and people in this city is truly something to be proud of.

“If you saw what happened or have any information about the collision or the two males running off and you don’t think anyone should get away with this then call police on 101 quoting incident number 418 of 18/01/19.”