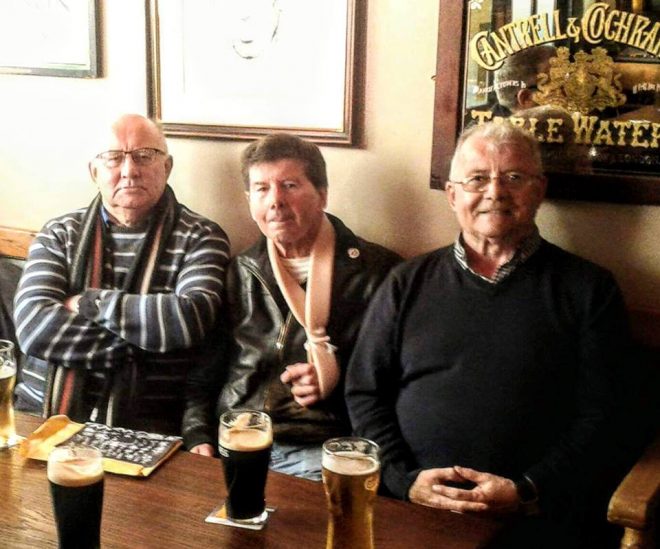 Liam Hillen passed away suddenly at his home in Derry on Christmas Day. He was aged 69

HUNDREDS of people are expected to turn out today to pay their respects to Liam Hillen who passed away last week.

The son of the late Rosaleen and Jim Hillen, Liam is survived by his partner Sue, sons Daniel and Ryan, brothers Charlie and Alex.

He will be laid to rest afterwards in the City Cemetery.

An insertion reads: “Dearly loved and will be sadly missed by the entire family circle.”

Liam was just a teenager when he took a paintbrush to write the soon-to-be-famous slogan ‘You Are Now Entering Free Derry’ on the wall of a house in the city after he was prompted by Derry civil rights activist Eamonn McCann.

Following his death on Christmaas Day, Mr Hillen’s nephew Gerard wrote: “My uncle Liam will be at the gates of heaven writing ‘You are now entering free heaven!'”

In the wake of his death, Eamonn McCann paid tribute to Mr Hillen and described him as “a modest man” who never made a fuss about his role in the creation of the iconic slogan.

Mr McCann told the story of how the slogan painted on one of the most intense nights of the civil rights campaign was inspired by US student protests at the University of California, Berkeley.

“The slogan was taken by me from Berkeley college in California where they had a thing up reading ‘You Are Now Entering Free Berkeley’, to do with the free speech movement among students there in the 1960s,” said the 75-year-old.

“Liam was around with a paintbrush as we were talking about putting up slogans – it was actually in a house in Wellington Street at about half two, three o’clock in the morning on the fifth of January, 1969.

“I came up with the idea of ‘You Are Now Entering Free Derry’ – not original, stolen from the American one – and Liam went and got a pot of paint and painted it. He was the first person to inscribe that on the wall.”

The former People Before Profit MLA said that in the past he had failed to acknowledge Mr Hillen’s role in the making of the historic wall painting – something Mr Hillen himself brought to the political activist’s attention many years later.

“To my distress, I was one of the people who denied him acknowledgement,” said Mr McCann.

“I have written quite a lot about the period, and it was not until about 20 years ago that Liam came up to me in the Gweedore Bar in Waterloo Street and said to me, ‘I’ve got a bone to pick with you – why didn’t you give me my due acknowledgement?’

“I said, ‘Well I will,’ and I have written about it a couple of times since, including in a book I’ve just had published.

“In the preface I apologise to Liam, saying I wanted to acknowledge that it was Liam Hillen who first inscribed that slogan.”

Mr Hillen had been an activist in the civil rights movement in the late 1960s.

“Every teenager around the place was active at the time.

“The most remarkable thing about Liam was that even though that wall became such an iconic thing, used and misused for commercial and political purposes, Liam never made much of a fuss.

“He was a very modest man.”