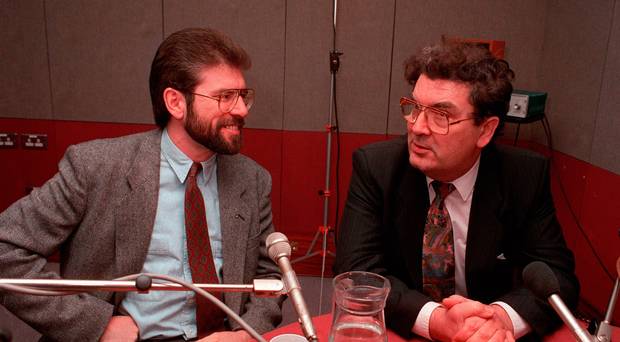 JOHN Hume expressed concern about the speed with which the Irish Government released IRA prisoners after the paramilitary ceasefires, declassified Irish state files have revealed.

Nine inmates were to be freed before Christmas 1994.

Mr Hume discussed his concerns with a senior British Government official, according to the files released in Dublin.

In November 1994 the official wrote: “He was a bit concerned about the speed with which Dublin was moving on the prisoners issue.

“Mr Hume had been repeating publicly his view that those were all things that needed to be settled down the road.”

A British Government note said none of the inmates being freed by Ireland were sought by UK police.

Mr Hume was given the Nobel Peace Prize for his efforts to end the violence in Northern Ireland.

His conversations with Sinn Fein President Gerry Adams in the late 1990s had begun to shift republican thinking on the conflict.

Early release of prisoners was a central demand of Sinn Fein, in exchange for the IRA ending its violent campaign.

It would take place in the North of Ireland following the signing of the Good Friday Agreement in 1998.

Former senior Ulster Unionist Sir Jeffrey Donaldson walked out of the Good Friday Agreement talks at the 11th hour over the early release of prisoners.