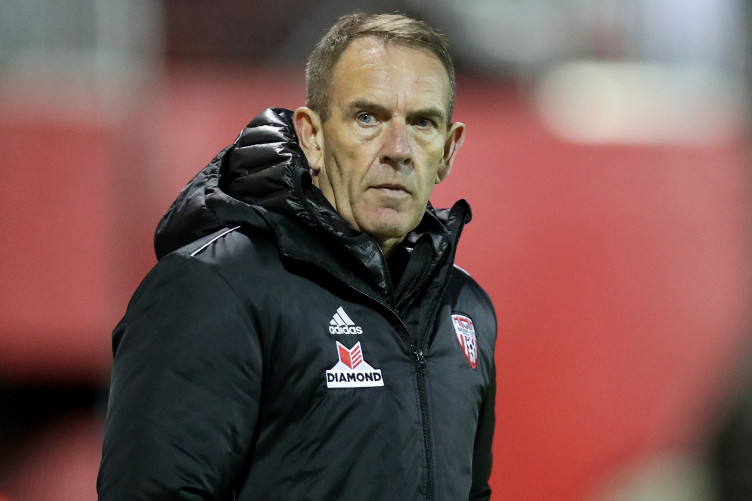 The highs and lows of the Kenny Shiels reign

AS Kenny Shiels departs Derry City after three years in charge, let’s take a look back through some of the club’s highest highs and lowest lows with the Maghera man in charge.

Football, as everyone knows, is a results business and in the end following a 20th league defeat against St. Patrick’s Atheltic, conceding 70 goals during the course of the season and insisting ‘performances were good’ game after game, the writing was firmly on the wall for Shiels this weekend.

However, as the dust settles, try and remember the positives that the former Coleraine, Kilmarnock and Greenock Morton manager brought to the club.

A football club he had a great passion for, he gave everything for Derry City, but in the end poor recruitment, poor results and poor excuses cost him his job.

1. High – Back to back European qualification.

Whether you loved him or whether you hated him, it’s doesn’t take Einstein to figure out that getting Derry City back into Europe during his first season (2016) was a massive achievement for the club after losing the likes of Michael Duffy, Stephen Dooley and Patrick McEleney.

Derry City went on to win 17 of their 33 games, drawing 11 times and losing five, accumulating a total of 63 points and finishing in third place. They conceded 29 goals, one more than the 2016 champions Dundalk, scoring 48 times over a successful season.

In 2017, Shiels, 62, guided the Candy Stripes to another remarkable European place on 51 points under trying circumstances.

The club, who were playing away from the Brandywell Stadium that year due to its ongoing redevelopment, had to come to terms with the tragic death of former captain Ryan McBride, sending shockwaves across football.

The death of Ryan McBride during Shiels’ second season in charge, not only set Derry City back several years but it also lowered the quality of defending in the League of Ireland.

The Brandywell boy, whether sounding bias or not, was, without doubt, the best central defender in the country during Kenny Shiels’ first year in charge, providing a firm wall alongside Aaron Barry in a back-four that also boasted Dean Jarvis and Conor McDermott.

Losing McBride on March 19, 2017, Shiels’ outfit played their first game since their captain’s death on March 31, losing 3-2 to Bray Wanderers at Maginn Park.

Derry wouldn’t win again for another seven games, recording an emotional 2-0 victory over Bohemians in Buncrana.

It was a huge weight off the team’s shoulders, they went on to gain another 33 points to qualify for Europe in a gut-wrenching and utterly brave year.

No one should ever underestimate what that year was like for Kenny Shiels as a manager of that team.

The pressure he had on his shoulders that season is a testament to not only who Kenny is as a manager, but also as a person.

And every City supporter should be enterally grateful for his contribution to Derry City that campaign.

Speaking to the Independent.ie in October 2017, he spoke of McBride’s death: “You had 20 players there and the youth players were there too just looking at each other and no one knew what to say. I’m thinking I’m supposed to be the leader of this group of people. What do I do now? And you have to try and act like you are unaffected by it and you can’t. That emotion is there and you think about all the things that are happening . . . it’s really hard to take and no one can understand it.”

Shiels was a leader on and off the pitch for Derry City, he led the club with dignity during an awful period to success.

He stood by his players no matter what, and in the end, he fell on the sword of faith he so ferociously defended his players with.

Winning a trophy is a priority for any manager when they take over at a club such as Derry City.  But for Shiels, it came during a time when the league form was so horrendous during the 2018 campaign.

It’s hard to believe, but winning the League Cup almost goes down as unimportant, because the league form was so bad during the season, the bread and butter as it’s been called so many times this week, that Derry City fans failed to see the positives from this – after all, the club, no disrespect to Stephen Henderson’s side, beat Cobh Ramblers at the Brandywell – beating only one Premier Division side on their way to the final. Kenny Shiels led Derry City to their first trophy in six years. The Candy Stripes beat Cobh Ramblers 3-1 in the EA Sports Cup final in September at the Brandywell

However, despite all this, it was the club’s first trophy in six years and therefore it must go down as a positive as it will in the history books.

Let’s not forget, during his time in charge, he let go of Joshua Daniels, Nathan Boyle, Patrick McClean, Mark Timlin and he failed to recognise the first-team qualities of players such as Sam Todd and Ben Doherty, who have been doing exceptionally well since leaving the club on loan.

Whether he likes to admit it or not, he also signed players from across Europe and virtually none of them kicked a ball for Derry City – these included Chris Turner, John Cofie, Conor Agnew, Armin Aganovic, Niall Logue, David Hopkirk and Dapo Kayode.

Shiels insisted he was trying his utmost to bring the best players to the club pointing at local man Georgie Kelly as an example last month.

He continually used attendance numbers, money, the media, officials and even Dessie McCallion for his team’s downfall this season – the buck stops with the manager. The writing was on the wall for Shiels following an atrocious league campaign.

Whether you see these as genuine excuses or just a long list of nonsense is up to you, but make no mistake, these meaningless excuses, whether he was trying to protect the club or not, wasn’t fooling anybody.

Even after Cork City’s 3-0 thrashing of Derry City at the Brandywell, a fixture Cork played in second gear for 90 minutes, Shiels insisted his team had a positive performance.

Speaking at the time, he said: “I am delighted in the performance,” he said. “The outcome, the scoreline, kills me again, it kills us all, but I have to say that the performance was really good.”

Unfortunately, Shiels had rose tinted glasses on at the end for sure. Two more defeats against relegated Bray Wanderers and St. Patrick’s Athletic was the straw that broke the camel’s back and brought to a close the Kenny Shiels reign.

Shiels concluded his tenure with an eighth place finish, the club’s lowest position since 2014, and ushered Derry to the worst defensive record in their history – conceding 70 league goals. Almost as many as Dundalk, Cork City and Shamrock Rovers when combined.

There was never a dull moment with this manager, there is no doubt about that. As for the future, it is crucial the Derry City board must make the correct appointment and do it quickly.

It is going to be a long winter in the west bank of the River Foyle as a full revamp of the Derry squad and a new era begins.