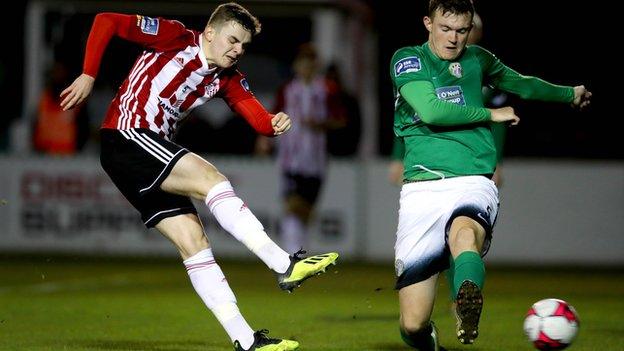 DEERY City fell to a seventh defeat in eight league games as a late goal gave bottom side Bray Wanderers a 2-1 victory at the Carlisle Grounds (kick off 7.45 pm).

Before the game, manager Kenny Shiels was upbeat about getting a win against the relegated sea side team.

And son Dean Shiels gave him hope of a win when he slotted in a Derry opener at the Carlisle Grounds from Ronan Hale’s cut-back on 15 minutes.

But Bray levelled 11 minutes later when Sean Heaney headed in from a free-kick.

Wanderers keeper Evan Moran kept his team in the game in the second half and Bray snatched a winner in injury-time thanks to John Sullivan’s header.

The pressure is building on City boss Shiels and the latest defeat comes after former Derry striker Liam Coyle said over the weekend that the manager appeared to be “building on sand” at the moment.

However, this is a game Derry should have won and they made a good start against an already-relegated Bray team with Shane McNamee hitting the underside of the bar with the ball falling close to the line.

Shiels put Derry in front a minute later with a composed touch and finish after good work from Hale.

Bray hit back with Jake Ellis seeing Jamie McDonagh clearing his shot off the line before Heaney connected with Kevin Lynch’s free-kick for the equaliser.

Derry pushed for a second goal after the break but they were thwarted by Moran and poor finishing.

Eoin Toal squandered a good chance by heading over from a Jamie McDonagh corner before Moran denied Alaistair Roy and Hale.

City substitute Aaron McEneff fired just wide and a frustrating night for the visitors ended when Wanderers clinched victory in the fourth minute of added time to end a run of nine straight league defeats.

The result means Derry will finish seventh as they prepare for their final game of the campaign at St Patrick’s Athletic on Friday night.