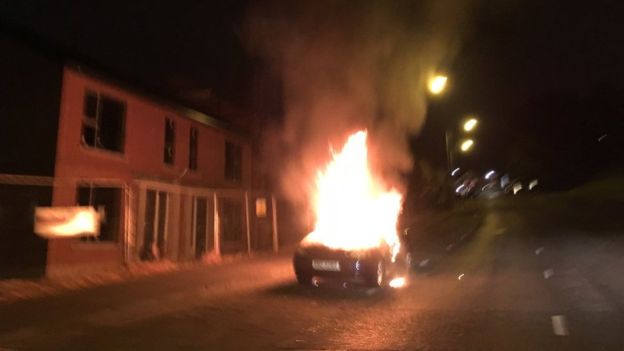 Rioter set a car alight last night in Fahan Street on Monday, July 9 in a further night of rioting in Derry

PSNI chiefs have been forced to launch a special internal recruitment drives in a last gasp bid to get officers to work in Derry and Strabane.

Rank and file officers don’t want to serve in Derry and Strabane because of threat from dissident republicans.

Police bosses have sent out an email asking constables who failed to meet the standards of the most recent promotion process whether they would be willing to take a sergeant’s post in the North West district.

They are also planning to run a specific recruitment process for detectives willing to work in the area.

It comes after a long hot summer during which Derry experienced some of its worst violence in decades.

Crowds of up to 200 gathered in the city over six successive nights in July, with police coming under sustained attacks from petrol and blast bombs.

The city made headlines with footage of the unrest – including one protester hurling a petrol bomb at the windscreen of a passing van – attracting widespread criticism.

Last August a published report said that relationships between the community and police in parts of Derry have “deteriorated considerably” in recent years.

A lack of confidence in policing and the criminal justice system has translated into historically low levels of reporting crime and a discernible increase in hostile attitudes towards the PSNI in areas like the Brandywell and Creggan, according to the report.

According to a report in today’s Belfast Telegraph, in order to be considered for promotion to the rank of sergeant, officers ordinarily sit an exam.

If they pass the exam, they move on to a second phase in the process, which involves them being assessed in role play scenarios.

The top performing candidates are then placed on a merit list and positions are offered to officers in descending order. If a person declines any of the sergeant posts they are offered, they move to the bottom of the list.

The number of people on the merit list varies from process to process, but usually stands in the hundreds.

PSNI bosses have been unable to find enough officers to fill available sergeant posts in Derry and Strabane from the current merit list, prompting them to run a special recruitment drive for the area.

The process is open to officers who passed the most recent sergeant exam but did not perform well enough to make it on to the current merit list.

One PSNI officer told the newspaper that the attitude towards police from the general public in the area is playing a role in officers passing up the opportunity of promotion.

“The dissident threat in Derry and Strabane is extremely high, it’s a different kind of policing up there because of that,” she said.

“I do think geography plays a role in it as well but there must have been some people who live in that area who were up for promotion but who turned it down.

“The fact is people are choosing not to work there, while the security situation and the attitude of people is putting officers off going there.”

The attempt by police chiefs to entice officers to work in the north west comes as a senior officer refused to rule out the return of the controversial 50:50 recruitment process. 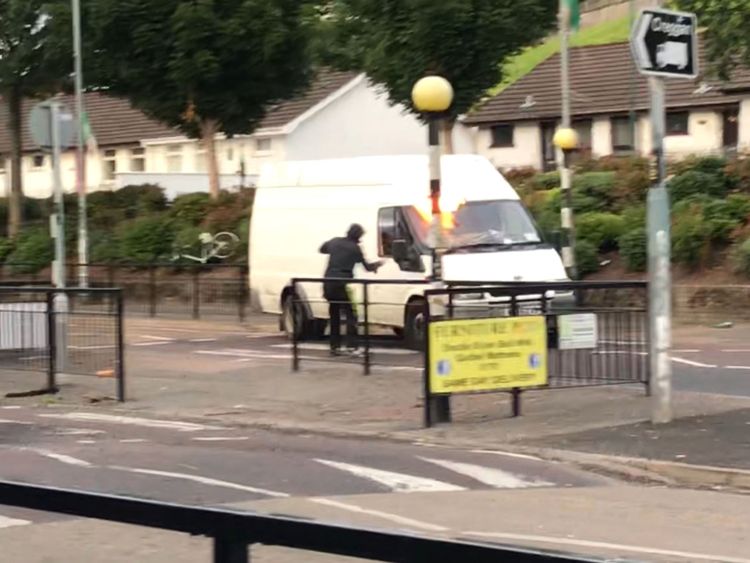 SDLP MLA and Policing Board member Dolores Kelly is concerned by the apparent necessity to run a special process for Derry and Strabane.

“It is a worrying development. I think the first thing the PSNI needs to be doing is finding out why these officers are turning down promotion in Derry and Strabane, and if this has to be done independently, then so be it,” she said.

“The fact that they are opening the process to officers who didn’t make the grade the first time around is also concerning because the people of Derry and Strabane deserve the same quality of policing as other areas.”

UUP MLA Doug Beattie also expressed concern at the development and said the PSNI should consider the possibility of introducing mandatory placements for officers to ensure posts are fulfilled as required.

“This process was required in order to effectively resource the policing district and to continue to provide a high standard of service.”