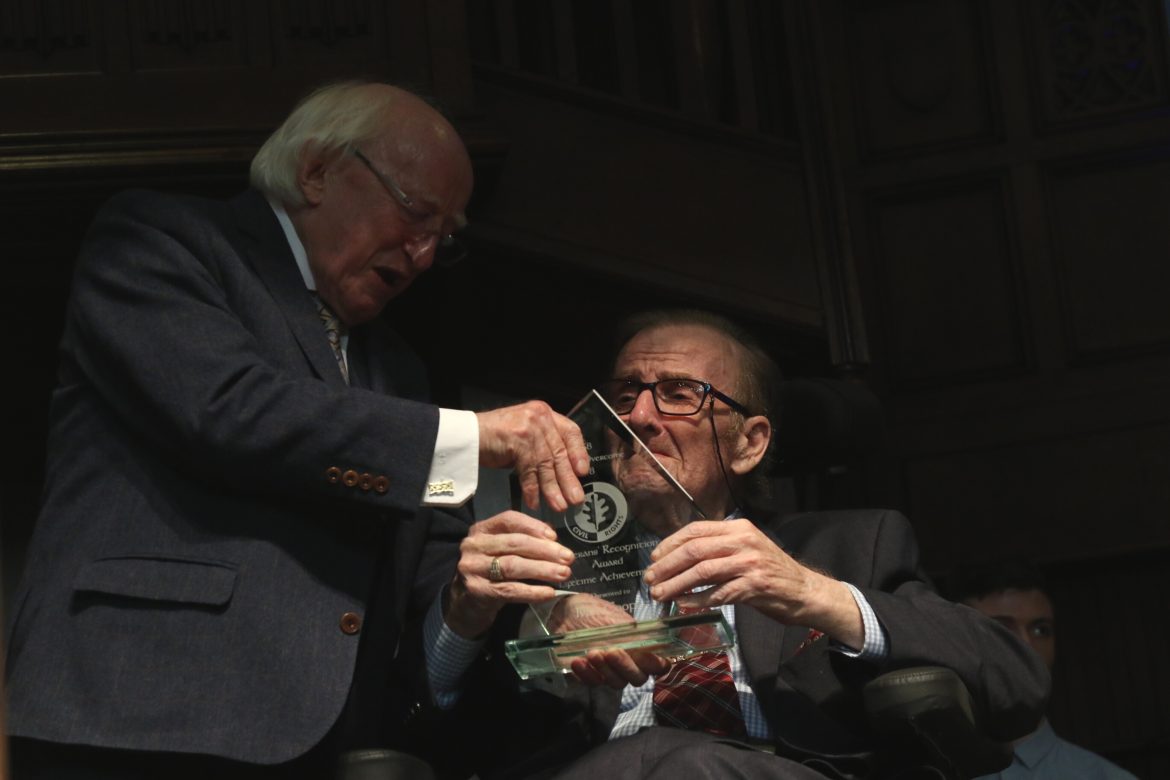 THE PRESIDENT of Ireland, Michael D Higgins, today presented a special award to the leaders of the Civil Rights movement in Derry.

The President received a rapturous response to his stirring speech at the Guildhall on the 50th Anniversary at the Civil Rights Festival.

During his speech, he reflected 0n the context of poverty, inequality and injustice which ignited the CivilRights campaign this day 50 years ago.

Mr Cooper, who is now in a wheelchair, was on the stage at the Guildhall to receive his special award from the President.

There was thunderous applause when the President paid tribute to Mr Cooper for his work as one of the main champions of the movement which “changed the course of local history”.

Fifty years ago civil rights protestors were baton-charged by the RUC at Duke Street during a rally over housing and equal rights. President Higgins told a packed Guildhall: “It would be the march of 5 October 1968 here in this city which brought the Civil Rights Movement to the attention of the world,” said the President.

“It was, of course, undertaken at the request of the Derry Housing Action Committee, and may I say what an honour it is to see some of the members of the Committee here today,” he said. President Higgins pointed out that as with the housing protest in Caledon of the same year it was ordinary women demanding what they believed were their natural rights and entitlements that provided the movement with its initial impetus.

“As Fionnbarra Ó Dochartaigh has reminded us, the origins of the Committee can be found in February 1968, following a discussion at Derry Corporation’s Housing Department between four women – ‘Mrs. McNamee, Dillon, Olphert, and Quigley’ – living in flats on Limavady Road who had been forced to live by candlelight when they had found their electricity cut off,” he said.

The President said the Derry Housing Action Committee like the movement as a whole had been a “broad church” comprising “socialists, republicans, labour activists, and trade unionists, including, of course, Fionnbarra Ó Dochartaigh, Eamonn Melaugh, and Eamonn McCann”.

He recalled a sense of awakening upon witnessing the images of RUC members batoning peaceful protestors of the streets half a century ago.

“Like all those who viewed them on the television, I can still recall the images of the Civil Rights march of the 5th of October – the baton-charge by the police on Duke Street, the kicking and punching of protestors – and I remember reading contemporary reports on the intimidation of photographers and cameramen documenting the attack,” he stated.

“These images profoundly shocked people across Ireland, Britain and the wider world, and instantly linked, in the minds of many who saw them, the struggle for civil rights in Northern Ireland to the other great movements for freedom, democracy and social justice across the world – connecting Derry to Paris, Rome, Berlin, Prague, Mexico City, Warsaw and Cairo. Mayor John Boyle makes a special presentation to President Higgins as he and his wife Sabina met with Pat Hume in the Mayor’s Parlour on their arrival at the 50th anniversary Civil Rights Festival.

“Three British Labour Party MPs – Russell Kerr, his wife Anne, and John Ryan – had had answered the call and were standing close to Gerry Fitt when he was struck by police officers,” he said.

The President observed how the events of 50 years ago changed the course of Irish history and paid tribute to two of the key figures that emerged as among the Derry civil rights movement’s most vocal spokespersons in the march’s aftermath.

“The 5th of October march galvanised the movement for Civil Rights in Ireland. In the days which followed, civil rights groups in Derry City merged to form the Derry Citizens’ Action Committee,” said the President.

“Its first chairperson was of course Ivan Cooper, and may I add my own thanks to Ivan, as President of Ireland, for the courage, the leadership and the dedication to the cause of justice – justice in all its forms – that he has demonstrated throughout his political career.

“The vice-chair of the Committee was another remarkable servant of the people of the island of Ireland, John Hume,” he added.