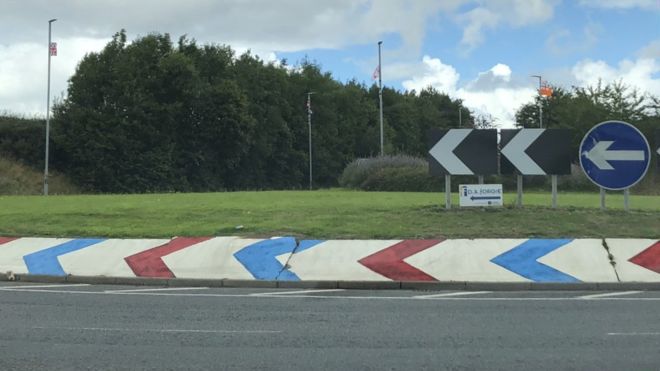 Dallat: Department not reporting damage of public property to PSNI Roundabout in Limavady painted red, white and blue by loyalists in August this year

SDLP East Derry MLA John Dallat said he is “shocked beyond belief” that the Department for Infrastructure has made no formal complaints to the PSNI about damage caused to kerbstones and other public property in the last three years.

The information was obtained by Mr Dallat in a Freedom of Information (FOI) request to the Departmental Information Manager at the DfI.

The response reads: ‘In response to your request, I can confirm that in the period 2016 to present, the Department has made no formal complaints to PSNI regarding the painting of road edge kerbs on other public property.’

In August, a roundabout in Limavady along with kerbstones were painted red, white and blue.

The MLA for East Derry commented:

“I am shocked beyond belief that a government department responsible for millions of pounds of public property doesn’t have a practice of reporting criminal damage as a matter of course.

“The cost of removing paint and replacing signage criminally damaged must run into hundreds of thousands of pounds and nothing can be done to deal with the culprits because there are no formal complaints made by the DfI.

“In a recent meeting with PSNI chiefs this anomaly was highlighted to me as the reason offered as to why they have made no attempt to prosecute those involved in painting roundabouts, kerbstones and other public property.

“The police claimed in cases where they know the culprits they have not submitted files to the Public Prosecution Service (PPS) because they would be rejected because no one is complaining.

“They went further and suggested that even if the PPS were to recommend prosecutions these would be thrown out of court, again because there is no formal complaint made.

“I will go back to DfI to establish who took the decision not to prosecute and for what reasons,” added Mr Dallat.