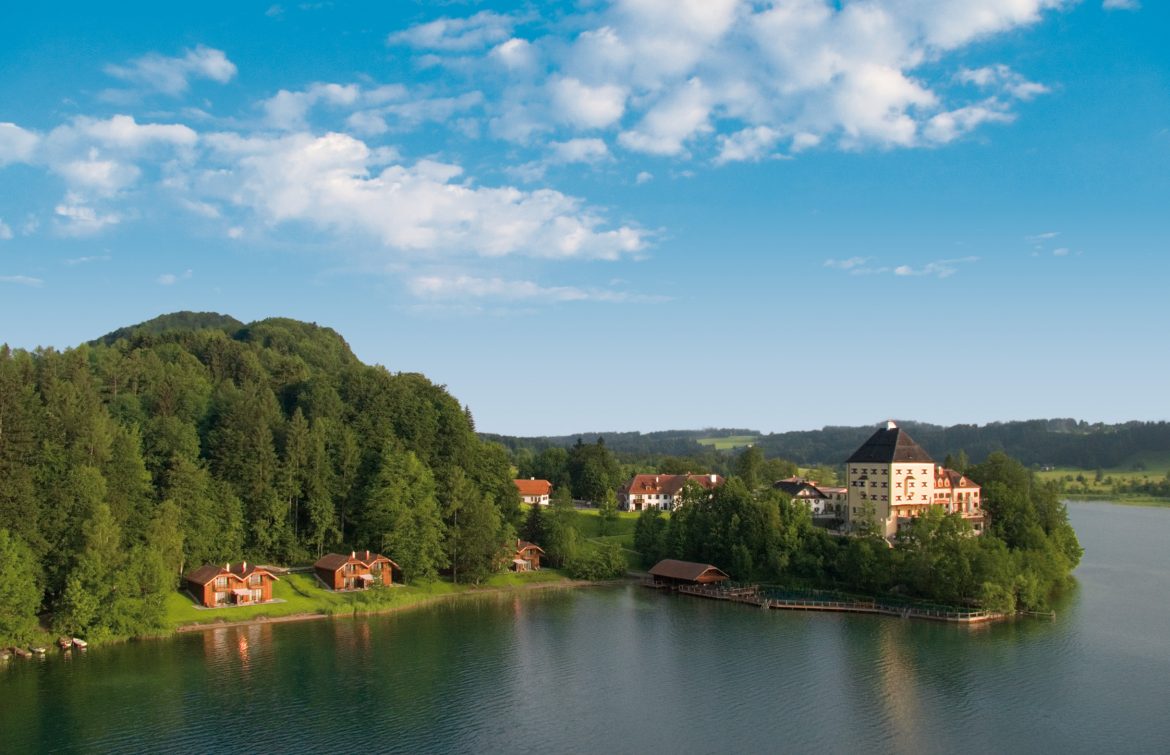 BY Adam Jacot de Boinod
THE province of Salzburgerland is to Austrians what Lakes Como and Maggiore are to the Italians and the Lake District is to us Brits: a refuge, a delight and a natural source of immense pride.

I arrived at Fuschl and her lake called Fuschlsee and I walked around the lakeside where the grass from the ‘streuweise’ (straw meadow) is mown once every autumn and used not for fodder but for straw in the cowsheds.

Now and then I was stopped in my tracks by the distinctive aroma of the late summer flowering of pink marsh orchids and the sight of the pale purple crocuses.

The more mature of the sycamore trees lining the lakeside peel off bark from their trunks in panels creating a patchwork of grey and reddish brown that reminded me of plane trees.

I stayed first at the lake’s eastern end at Ebner’s Waldhof  (www.ebners-waldhof.at). What a wonderful mixture this hotel is: part alpine chalet, part modern and part authentically Austrian and suggestive of a bygone era.

This amalgamation of buildings has something for everyone with quirky corridors lined with curiosities such as horse carts and deer antlers, tableaux and taxidermy.

Two days later I went on to the lake’s western and even quieter end to stay at the luxurious Schloss Fuschl (www.schlossfuschlsalzburg.com). Perched on a prime vantage point it looks across the entire length of the lake.

Directly beneath the breakfast room that resembles a ship captain’s bridge, at quite a dramatic drop to the shoreline, is broad decking designed for both bathers and sunbathers.

I reached Vienna and my final destination, the Hotel Bristol www.bristolvienna.com that has been carefully restored to its former glory that boasted the Duke of Windsor amongst its clientele.

Wooden panelling and stained glass windows with distinctive ‘jugendstil’ (Viennese Art Nouveau) floral patterns decorate the elegantly stylised rooms along with an elaborate staircase and an historic elevator with its padded leather seats that suggested both opulence and grandeur.

In the ‘Hofsburg Complex’ is the famous Spanish Riding School. A must for anyone visiting Vienna however short their trip. It’s set in a stunning baroque room with beautifully lit chandeliers and set to waltz and other classical Viennese music.

These stage performances are a sustained tradition and the result of years of dedication.

The horses are white Lipizzaner stallions and are a breed produced by crossing Spanish, Arab and Berber horses.

The steps of both their orchestrated ballet and the finale, the synchronised quadrille, include the ‘croupade’ where they leap into the air with their hind legs and their forelegs bent under their belly, the ’levade’ with their hocks or tarsuses almost touching the ground, the ‘capriole’ with the simultaneous kick of their hind legs and the ‘piaffe’ where they trot on the spot between two pillars.

Just behind the ‘Museums Quartier’ and set in a quiet courtyard I ate at the vegetarian Tian Bistro (www.tian-bistro.com). Here, sitting amongst plants, wooden crates and an unusually non-stentorian Austrian clientele, I experienced ‘Sharing Chef’s Garden’, a combination of five different culinary delights made from locally sourced, seasonal, ‘market-fresh’ produce.

Even as a non-vegetarian the burger with its barbecue dip was a suitable alternative to its meat version.

More than 450 balls are held in Vienna annually, where revellers dance to anything from traditional waltz to more comtemporary beats. At the ‘Techno Ball’ outfits comprise of suits and sneakers.

Yet in stark contrast to the glamorous and traditional ‘Opera Ball’ there’s both a ‘Coffeehouse Owners’ Ball’ and a  ‘Confectioners’ Ball’.

Things get even more outré with the ‘Chimney Sweeps’ Ball’ which opens the season as they pile onto the dance floor wearing their traditional work clothes. At the ‘Weightlifters Ball’, dancers are summoned by the call “Alles Walzer” (“Everyone Waltz”) before later, reassuringly perhaps, they lift their familiar dumbbells.

My final outing was to the Belvedere, a historic building complex consisting of two Baroque palaces (Upper and Lower) set in a park landscape with its botanical gardens, matching flowerbeds and cascading fountains.

At the Lower Belvedere are two marbled and mirrored halls, one with gilded oriental decoration, the other with white relief wondrously set in wooden panelled surrounds.

The Upper Belvedere houses both an engaging and rare Monet portrait of a cook as well as Klimt’s iconic ‘The Kiss’, which, like the lakes, is both a delight and a source of immense national pride.

Price based on 2 adults, on bed & breakfast, staying 2 nights at each of Ebner’s Waldhof, Schloss Fuschl and Hotel Bristol, Vienna and includes private transfers, train travel from Salzburg to Vienna and return flights to Gatwick. Departs early November.

Adam had further support from www.stanstedexpress.com and www.holidayextras.co.uk (who offer airport lounges at all major UK airports and many international destinations).

Cities join together for Celebration of Learning...