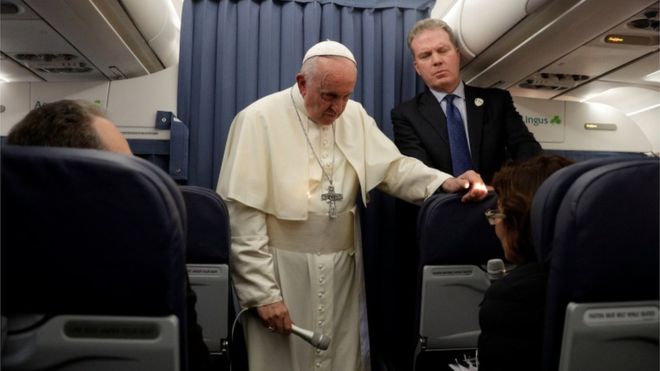 POPE Francis has refused to respond to claims by a former Vatican diplomat, who has called for him to resign.

Archbishop Carlo Maria Vigano also accused him of covering up allegations of sexual abuse by a US cardinal.

The Pope was asked about the accusations by reporters on his flight back to Rome after this weekend’s Papal visit to Ireland.

He said he would not say a single word in response to the 11-page letter from Archbishop Vigano.

“I will say sincerely that I must say this, to you,” he said, when asked by a journalist about the letter, “and all of you who are interested: Read the document carefully and judge it for yourselves.

“I will not say one word on this. I think the statement speaks for itself.”

The timing of the letter, released as the Pope addressed sexual abuse by priests during his visit to Ireland, has raised questions about whether Pope Francis is facing a coordinated attack from traditionalists within the Catholic hierarchy.

“You have sufficient journalistic capacity to draw conclusions,” Pope Francis told the reporters on board his plane.

“When a little time has passed and you have the conclusions, perhaps I will talk,” he added.

He says the pontiff knew about allegations of sex abuse by a prominent US cardinal for five years before accepting his resignation last month.

The Pope “knew from at least June 23 2013 that McCarrick was a serial predator,” wrote Archbishop Vigano, adding that “he knew that he was a corrupt man, he covered for him to the bitter end.”

“Pope Francis must be the first to set a good example for cardinals and bishops who covered up McCarrick’s abuses and resign along with all of them,” the letter says. 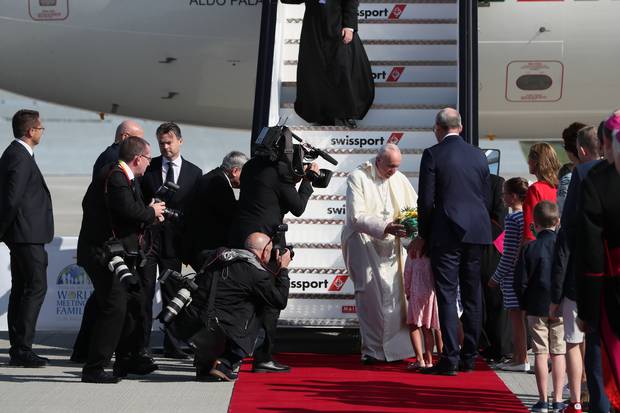 However, Archbishop Vigano has not produced any written or other evidence to verify his alleged 2013 conversation with the Pope.

He served as the Vatican’s ambassador to Washington from 2011 until 2016.

He also says he wrote a memo to senior figures in the Vatican as early as 2006, warning that Theodore McCarrick was suspected of abusing adults at a seminary while he was a bishop in New Jersey between 1981 and 2001.

At a Mass on Sunday in Dublin’s Phoenix Park, the culmination of his two-day visit to Ireland, Pope Francis begged forgiveness for the “abuses in Ireland, abuses of power, conscience and sexual abuses” perpetrated by Church leaders.

Earlier, he said no-one could fail to be moved by stories of those who “suffered abuse, were robbed of their innocence and left scarred by painful memories”, and reiterated his wish to see justice served.

Pope Francis used the penitential rite of the Mass to list a litany of different types of abuse and mistreatment inflicted on Irish people by Church figures, and the cover-ups of sex crimes.

On each occasion he asked for forgiveness, the congregation – estimated by the Vatican to number 300,000 – applauded.

The Irish Catholic Church has been rocked by revelations of paedophile priests, sexual abuse in Catholic-run orphanages, and the exploitation of women in mother-and-baby homes.

During the first day of his trip, Pope Francis met eight survivors of sexual abuse, reportedly telling them he viewed clerical sex abuse as “filth”.