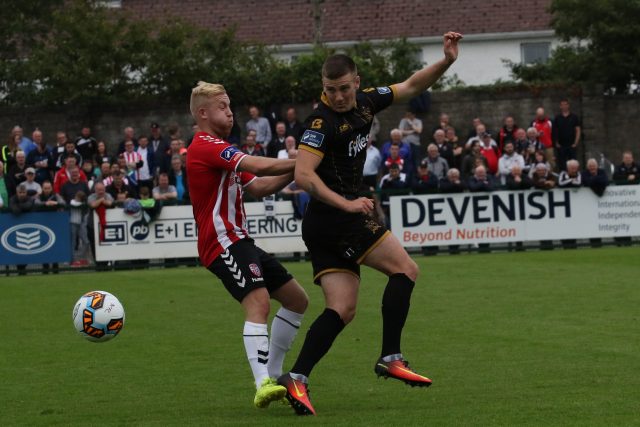 Shiels: Waterford are the team to catch in race for Europa League spot

DERRY City start a run of home games tonight, Friday, August 17, as high-flying Waterford arrive in Derry ahead of a crunch league clash for both teams (kick off 7.45 pm).

Only five points separate the visitors in third and City in fifth as the race for the third European spot looks likely to go down to the wire.

Manager Kenny Shiels was very aware of the threat posed by Alan Reynolds’ outfit and insisted that this was a game that would really test the home team’s mettle.

“The top two are out clear and Waterford are the team to catch after that. They’re having a fantastic season and are a terrific side so we know what we’re up against.

“Obviously they come here as favourites for the game but I want us to be ready to give our best for the supporters and for the city.

“We’ve come to a really vital part of our season now and I know the players and staff are gearing up for the challenge.

“I’m hoping that our supporters will turn out in numbers over the next few games because they could make the difference.

The Derry boss was a relieved man that his injury and suspension list has shortened considerably over the past couple of weeks and said that it was good to have an almost full panel to choose from.

“Ben Doherty has gone out on loan to Glenavon and both Nicky Low and Conor McDermott remain on the injured list but elsewhere we should be OK” he said.

“Following on from his three game suspension, Eoin Toal has been down with flu this week, but he trained this morning so I’m hoping he’ll be available for selection.”

Nicky Low is currently recuperating after surgery on his abdominal injury at the weekend.

The midfielder has been a huge loss to the team in recent weeks and many will be hoping to see him in City colours again before the end of the season.

The best wishes of all at the club are sent to Nicky for a speedy recovery.

Maanwhile, the club has also confirmed that the upcoming Irish Daily Mail FAI Cup clash with St Pat’s will take place on Friday 24th August with a 7.45pm kick-off at the Brandywell.

Tickets will be on sale from the club shop at the Waterford game this evening.

Shiels: Waterford are the team to catch in race for Europa League spot was last modified: August 17th, 2018 by John