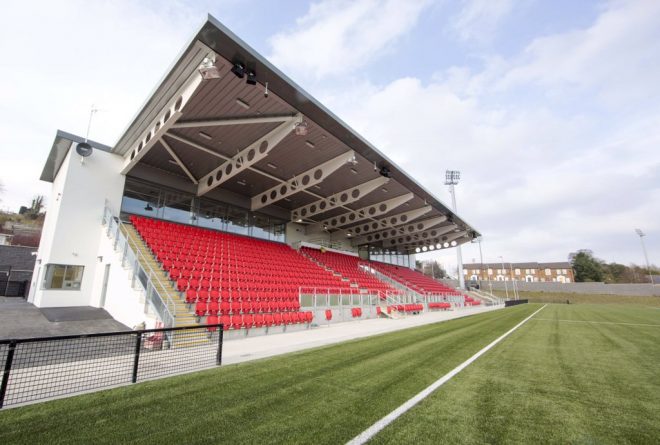 The Foyle Cup coaches rolled back the years on Wednesday morning to claim the bragging rights in their much anticipated challenge game with the Clipper Crews XI at the Brandywell.

First half goals from Stephen Harley and Mark Duddy laid the foundations for the win that was less comfortable than the scoreline suggested as a second from Duddy after the break and a brace from Kevin Kelly made sure of the win.

Striker Namo Aantea earned Clipper a consolation goal from the spot in the second half but the result was secondary to the opportunity to celebrate two internationally renound events taking place in the city this week.

Mayor of Derry City and Strabane District Council, Councillor John Boyle, congratulated both teams for taking time out of their busy schedule to take part in the occasion.

“I was delighted that we were able to mark the fact the Foyle Maritime Festival and the Foyle Cup are taking place concurrently this week with this game,” he said. “There has been a fantastic buzz around the city in recent days and it has been great to see the participants from the Foyle Cup down on the quay in their tracksuits and soaking up the atmosphere.

“I know it is a busy week for everyone involved so congratulations to the players, referees and supporters for taking time out of their schedule to take part.

“Well done to the Foyle Cup coaches on their win and good luck to everyone involved for the remainder of their events – perhaps a sailing rematch on the Foyle would be a chance for the Clipper Crews to even up the score!”

“We were delighted to accept the invitation of the game from Clipper, it’s a nice way to celebrate the fact that two major events are being held in the city in the same week.

“I would like to an extend an invitation to anyone who is in the city for the Foyle Maritime Festival to come along to our games this week and I’m sure there our teams and supporters will take advantage of the chance to enjoy both festivals.”

This year’s Foyle Cup runs until Saturday July 21st and is set to be the biggest yet with over 400 teams and 6,500 participants taking part and over 90,000 spectators expected to attend the games.

Full fixture details are available on the club’s website www.foylecup.com and supporters can also stay up to date with results and venues through the tournament app.

The Foyle Maritime Festival runs until Sunday 22nd July 2018, to help alleviate congestion caused by the higher volume of traffic in the city centre during the festival, the public are urged to familiarise themselves with the traffic and travel section of the website at www.foylemaritimefestival.com for full details of public transport, car parking and park and ride arrangements.

The Festival boasts a packed programme with highlights including a Voyages Showcase Event and Fireworks on Friday July 20th and a Parade of Sail on Sunday July 22nd where the festival will bid farewell to the Clipper Race yachts as they depart for the final stage of their epic journey around the world.