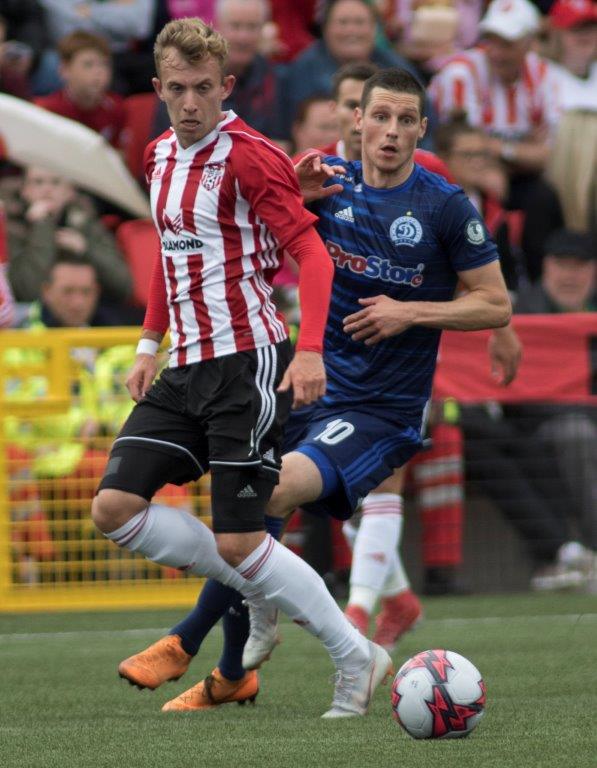 City have a huge job on their hands as they attempt to overturn a 2-0 Europa League first leg deficit.

It is not going to be an easy task but there is no doubting that the Candystripes will need to be a bit more adventurous than they were at the Brandywell if they are to have any chance of progressing.

It’s a situation Kenny Shiels is well aware of and the City boss was upbeat ahead of Tuesday’s flight.

“Their early goal in the first leg was a massive blow but we fought back well after that.

“There’s no point in going out there gung-ho and leaving ourselves too open but we do need to show more intent in the final third.

“We need to stay in the tie as long as we can because if we do that and can nick one ourselves, that would certainly ask the question.

On the team front, Shiels will have to do without midfielder Nicky Low who has missed the past month with an abdominal injury, and Conor McDermott who was sent off for two yellow cards in that first game.

Fortunately for the visitors they do have options now that all the new signings are available and while Minsk will be red-hot favourites to progress, Derry will hope to make a real game of it. The match will be played at the National stadium in Minsk- the first the club has played at their ‘spiritual home’ since 2012 as the venue underwent a facelift.

Dinamo are expecting a crowd of over 10,000 for their return to the ground while the game is expected to be streamed ‘live’ on social media.