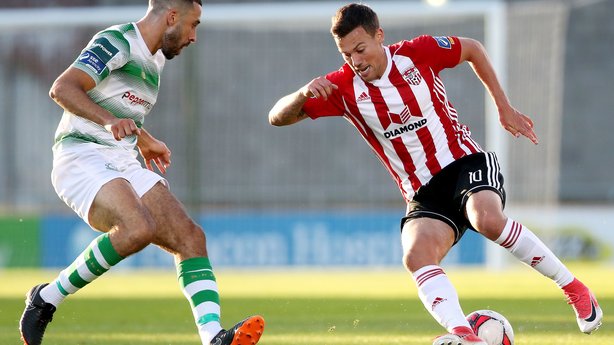 DERRY City host Limerick at the Brandywell tonight, Friday, July 6, as the side need a win to boost morale on and off the pitch after a run of poor form (klck off 7.45 pm).

The Candystripes returned to action after the mid season break with a 2-0 defeat away to Shamrock Rovers which saw the Hoops move clear in fourth place, pushing Derry down to fifth.

And it is a big week for the Candystripes, with the league fixture and the visit of Europa League opponents Dinamo Minsk also just a week away, Kenny Shiels will be keen to see some confidence restored in the home ranks.

And while the Derry boss does have a couple of his new options available- Ben Fisk and Danny Seaborne both in that category- Shiels has been left frustrated by events elsewhere.

Kenny’s son Dean was expected to be in the squad for the visit of the Shannonsiders, however the club confirmed this morning that the FAI have notified them that Shiels junior will be suspended for the game having only served one of two games handed to him in Scotland last season.

Fisk made an impressive debut last week and was one of the few players to impress in the defeat last week.

Seaborne joined at the start of the week and played in the friendly fixture against Cliftonville. The English central defender will add experience to a back line which has leaked goals at an alarming rate in recent games. With Darren Cole playing in midfield in recent weeks, the elder statesman in the City defence has been the 22 year old Jamie McDonagh.

Jack Doyle played his last game for the Candystripes last week and thus City will be forced into a couple of changes in their back line, with Seaborne, Toal, Peers and Cole in consideration for places in the centre half spot. McDonagh, McDermott and Doherty will fill the full back spots.

City will also look to welcome back Aaron McEneff and Nicky Low who missed the defeat against Shamrock Rovers.

However the club has yet to receive international clearance for two new additions, Aaron Splaine and Ally Roy and these two players are unlikely to be available for tomorrow night’s fixture.

The Manager knows how big a game this is for his side but he was remaining positive ahead of the fixture.

“Yes, we know it’s a game we really need to win in terms of that top three or four places but just as importantly we want to get our positivity back.”

“You could see six weeks ago just how big a difference that positive energy made to the team and the players individually and we need to re-discover that”.

“There has been quite a bit of negativity in recent weeks but everybody is aware that it’s up to us to change it.”

“We really hope that the supporters get right behind us tomorrow night and we will do everything we can to give them the performance and the result that everybody is craving.”

The visitors have had their own problems on and off the field in recent months and host of players have departed from Markets Field in recent weeks.

However manager Tommy Barrett saw his side secure all three points in a vital basement battle with Bray last week and will be hoping that his side can take something from the fixture.

The Blues were heavily beaten on their visit to the Brandywell but the game in Limerick was much closer and City were fortunate enough to take all three points.

Whilst Limerick have lost of number of players, they welcomed back Conor Eilis and Danny Morrissey last week and the pair have the ability to cause City dangers.