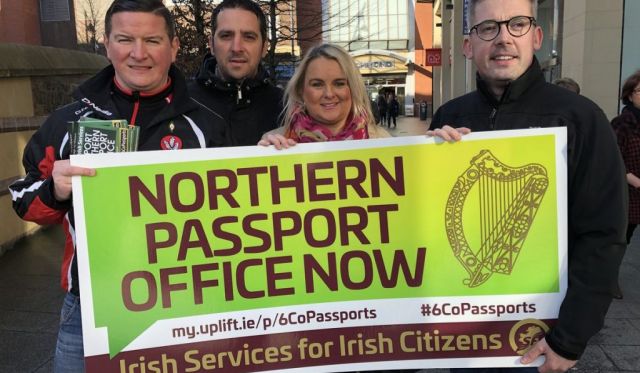 50,000 Irish passport applications from the North in 5 months

SINN Féin Councillor Colly Kelly has reiterated his call on the government to open a dedicated passport facility in the North.

He made his remarks following a response from the Department of Foreign Affairs which states that almost fifty thousand passport applications came from the Six Counties between January 1st and May 31st of this year.

Councillor Colly Kelly said: “Seanadóir Ó Donnghaile has written to Taoiseach Leo Varadkar, calling on him to acknowledge the need and work towards the opening of this much needed facility.

“During his recent visit to Belfast he raised this issue directly with An Taoiseach and he indicated an openness to look at the need.

“The clear and continuous rise in passport applications from the North warrants a review of how the government delivers their passport services speedily, efficiently and effectively, all across Ireland’s thirty two counties.

“The latest detail, which he has obtained through Parliamentary Questions, shows that 2018 is set to see yet another increase in applications from the North.

“The rise in the Six Counties is not happening in isolation, as revealed in this week’s Oireachtas Public Accounts Committee, in just one day last month more than ten thousand passport applications were received by the Irish Passport Office; this led to the Department of Foreign Affairs secretary general admitting at the meeting that staff are struggling with “unprecedented demand” and have shown “immense grace under pressure”.

“I agree with this assertion and commend our staff, but we must see the burden eased and the necessary investment made.

“The way to do resolve these unprecedented challenges is to improve service infrastructure throughout the country, to ease the burden on staff through strategic investment and to meet the demonstrable need that’s out there and to open this much needed and sensible resource in the North of Ireland,” added Cllr Kelly.