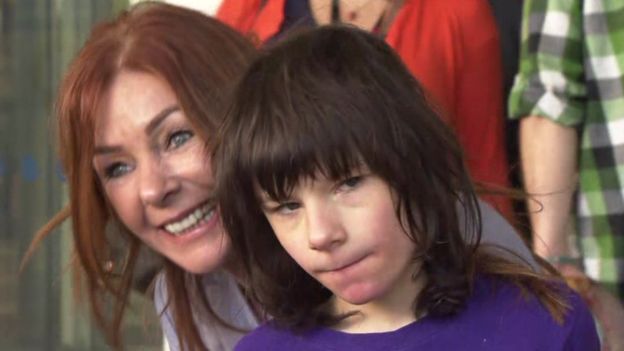 Charlotte Caldwell with her brave son Billy who has been discharged from hospital, She now says his medications is running out

CHARLOTTE Caldwell, the mother of battler Billy Caldwell, has called on the Home Office to issue a licence for the import of cannabis oil before her son runs out of medication again.

The 12-year-old suffers from severe epilepsy and requires cannabis oil to keep seizures under control.

However, Charlotte has now revealed he only has 16 days worth of the anti-epileptic drugs left.

She said: “It is likely that any further medication, whether for Billy or any other families, will have be sourced in Canada.

By law, Health Canada can only release this medication at 30 days’ notice. It takes two days to ship.

“This makes the instigation of a new policy extremely urgent as any families wanting or needing medication now will not receive it until this time next month at the earliest.”

Home Secretary Sajid Javid has announced a review into the use of cannabis-based medicines in the UK and has set up a expert panel to assess applications for a licence for the medication.

Ms Caldwell, from Castleder, said she anticipated being invited to meet the Home Secretary.

She has also asked to participate in some way with the new expert panel.

Her son was using prescribed cannabis oil to treat epileptic seizures until the Home Office blocked its prescription.

His mum tried to bring the medication into Heathrow Airport in a last-ditch effort to treat her 12-year-old son, but it was removed by border officials.

Last Friday Billy’s condition deteriorated and he was rushed to hospital.

After a week-long struggle, Home Secretary Sajid Javid used “an exceptional power” on Saturday to return one of the seven bottles of medication.

However, this medication is now running out fast.