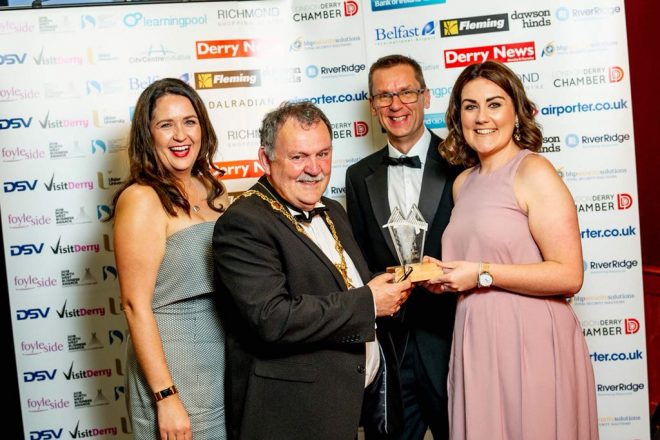 The award is the latest accolade secured by the Council for the event. Just two weeks ago the Slow Food Festival won the much coveted NI Food and Drink Experience of the Year award at the NI Tourism Awards in Belfast.

Congratulating the Council on their success, the Mayor Cllr Maolíosa McHugh said he was delighted to see the Slow Food Festival’s success acknowledged in this way and praised the hard work and dedication of all those involved in developing and delivering the concept.

He said: “This is another great news story for Council and the city and district as a whole.

“Our reputation for food is tremendous and again that is reflective in the success of the Slow Food Festival and the quality of food that was showcased at this event.

“The Slow Food is an innovative concept that promotes returning to the basics of food by using our natural resources and encouraging people to think differently about how they cook and eat food and I am delighted that the festival has been acknowledged in this way.

“I am delighted that the festival is enjoying continued success and the event will be returning to Guildhall Square on the 6th and 7th October.

Jennifer O’Donnell, Tourism Manager with Derry City and Strabane District Council said it was a great honour to receive the award on behalf of the Council and extended her thanks to those involved in the local food tourism and hospitality business for their support.

She said works was well underway to develop the programme for this year’s festival in October when she hopes to showcase all the best of local produce and food talent in the city and district.