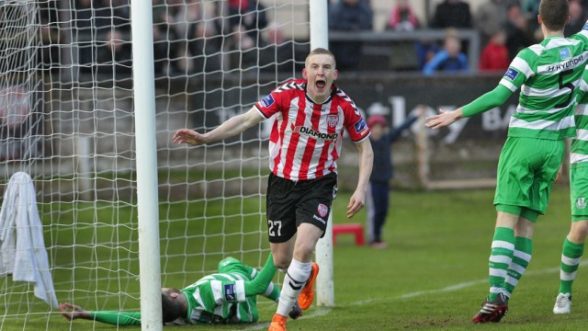 RONAN Curtis will be his say his Brandywell farewells against Sligo Rovers tonight in his last game in front of home fans.

He is moving to Portsmouth next Friday, June 8.

However, the 22-year-old will stay play for Derry City in its games against Rovers, Cork City and Bohemians.

The Candystripes will be without Rory Patterson this evening after the striker was given a 1-match ban on Thursday for picking up five yellow cards.

Kenny Shiels had hoped to have a full squad available for the visit of their North West neighbours but will now be forced into a change following that late setback.

The City boss was pleased that most of his injuries had cleared up ahead of a crucial game for his side.

“We’re not far away- Eoin Toal had a slight back strain this morning but other than that we’re near enough full strength.”

Shiels also admitted that he is currently in negotiations with players whom he hoped would come in this summer and add a bit of quality and experience to the current squad.

“Yes, I’m currently in discussion with a couple of players and although it is just that at the moment I am hoping to have more news in the near future.”

Turning to Friday night’s visitors the Manager felt that there wouldn’t be much in the game.

“You can’t really talk about favourites to win in this league. The 10-team set-up has made it much more competitive and every team is capable on their day.

“We will have played Sligo at least 5 times by the end of this season having drawn them in the League Cup.

“The first two were hard fought and I’m not expecting the rest to be any different.”