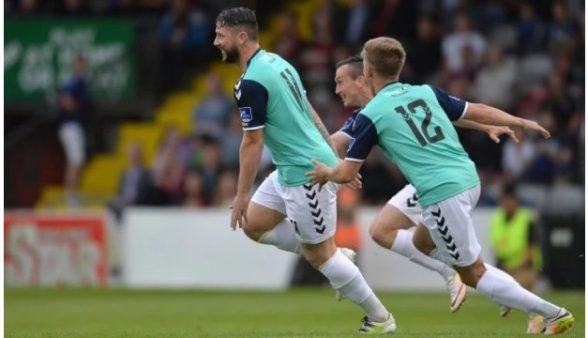 A WEAKENED Derry City side lost 5-2 tonight against St Pat’s in Dublin with the team dropping one place in the league to fifth (kick off 7.45 pm).

It was Derry’s second successive Premier league defeat in a row  but the Brandywell side still have a game in hand over St Pat’s, Waterford and Dundalk.

The first half was a five-goal thriller at Richmond Park with the Candy Stripes scoring after just six minutes from Rory Patterson who captalised on a mistake by the St Pat’s keeper.

St Pat’s hit back a minute later with a goal from Jake Keegan before Derry took the lead again from Darren Cole.

The hosts rallied at the end of the second half scoring two more goals, with Conan Byrne converting his penalty on 43 minutes before Kevin Byrne gave his side a 3-2 lead in at half time.

St Pat’s started the second half they way they finished in the first and went in search of more goals.

A fourth came on 54 minutes when Toner released Tommy Byrne who shimmied into space and hammers home a shot past Ger Doherty in the Derry goal.

And Darragh Markey sealed the victory on 90 minutes with St Pat’s running out 5-2 winners.

Candy Stripes boss Kenny Shiels will have to pick his team up ahead of Monday night’s home league game against Bray Wanderers at the Brandywell (kick off 7.45 pm).