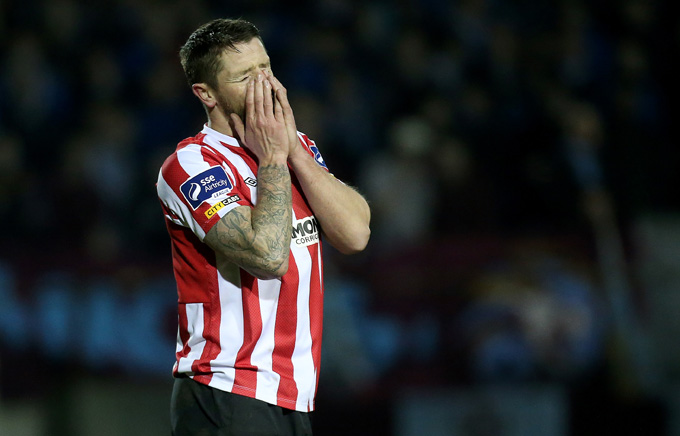 SHAMROCK Rovers spoiled the party at the Brandywell tonight (kick off 7.45 pm) as Derry City looked to extend its unbeaten run at home in the league.

A win would have seen the Candy Stripes leap frog Waterford into third place as the Bluemen who could only manage a 1-1 draw at home against third from bottom Sligo Rovers.

City still have a game in hand on Cork, Dundalk and Waterford but Cork extended their lead at the top to six points after a 1-0 win at home against second placed Dundalk.

Rovers will feel it was two points dropped rather than one gained at the Brandywell.

Stephen Bradley’s side were dominant for long periods of the entertaining encounter and the woodwork twice denied them in the second half.

After Rovers had a good half chance in the opening few minutes after Graham Burke’s centre flew across the six yard box, it was the home side who created the first real opening but Rory Patterson could only fire wide after Jamie McDonagh’s right wing cross had created the chance.

City were forced into a change on 31 minutes as Ben Doherty replaced Ronan Curtis, who was unable to continue after picking up a head injury, which had him initially off the field receiving treatment for a good five minutes.

Rovers should have taken the lead seven minutes later as Sean Kavanagh’s left wing free-kick picked out an unmarked Roberto Lopes, but the ex-Bohemians man headed over when well placed inside the box.

Right on the stroke of half-time Graham Burke broke the offside trap and raced clear of the City defence, but his poor left footed attempt flew well wide.

Rovers had a super chance to take the lead on 51 minutes as Daniel Carr showed good strength to get away from Darren Cole, but his shot from an acute angle was tipped onto the bar by Doherty.

Moments later a Burke right wing corner found an unmarked Lee Grace, but the centre-back headed over from close range.

With their tails up Rovers kept piling forward and just before the hour mark midfielder Aaron Bolger did well to get away from Eoin Toal’s sliding challenge, but he blasted wide when he only had Doherty to beat.

The woodwork came to City’s rescue for a second time on 67 minutes as Burke’s right-footed strike from a tight angle hit the post and Doherty did well to keep out Kavanagh’s follow-up drive.

Mural to be unveiled to youth worker...