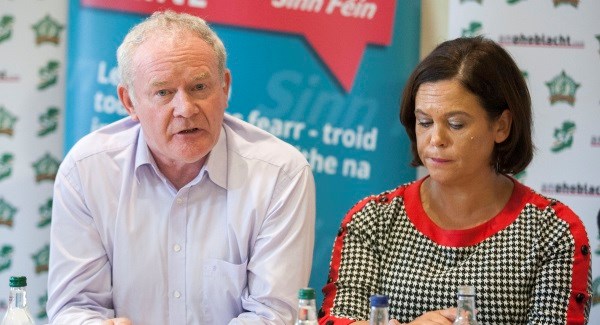 SINN Fein president Mary Lou McDonald has launched a blistering attack on what she called the “utterly repulsive” media in the Republic over the treatment of the late Martin McGuinness during the 2011 presidential election.

In a new book, Martin McGuinness: The Man I Knew, by Jude Collins, Ms McDonald singles out broadcasters Miriam O’Callaghan and Vincent Browne over what she saw as “the southern establishment” attempts to preclude his candidacy.

The book is published this week on the first anniversary of the death of Mr McGuinness, the former deputy first minister.

He died two months after quitting the Executive which brought down the Stormont Assembly saying there would be “no return to the status quo” with the DUP.

In the book, Ms McDonald references Ms O’Callaghan’s treatment of Mr McGuinness during a televised debate.

Ms O’Callaghan asked: “How do you square, Martin McGuinness, with your god the fact that you were involved in the murder of so many people?”

In the book, Ms McDonald says: “You would swear listening to these people that Martin McGuinness was the trigger that caused the Northern Troubles. The utter hypocrisy of it. And the cheek of them to say to him: ‘Who are you from Derry to presume that you’re Irish enough or that your citizenship is of sufficient standing that you should contest for the position of first citizen?’ It was absolutely obnoxious.”

Ms McDonald went on to write that RTÉ represented a failure of public service broadcasting.

“The thing was, they didn’t want him to be president,” she says. “He was an outsider. The establishment in the southern state have had it all their own way for a very long time and they’re not going to give up without a struggle. And yes, in part it’s to do with class: The hungry streets of Derry meeting the comfortable affluence of Dublin 4.

“With Martin, it was the idea that this was a Sinn Féin person. Here he was, coming and debating issues of Ireland; their attitude to Martin McGuinness was: ‘Who are you to question us?’ That’s how it shakes down. It was a partitionist mentality and one that was about protecting the status quo.”

Meanwhile, Ms McDonald said that while she is fond of Mr Browne, she felt he engaged in “nonsense” in his treatment of Mr McGuinness during another televised debate on TV3.