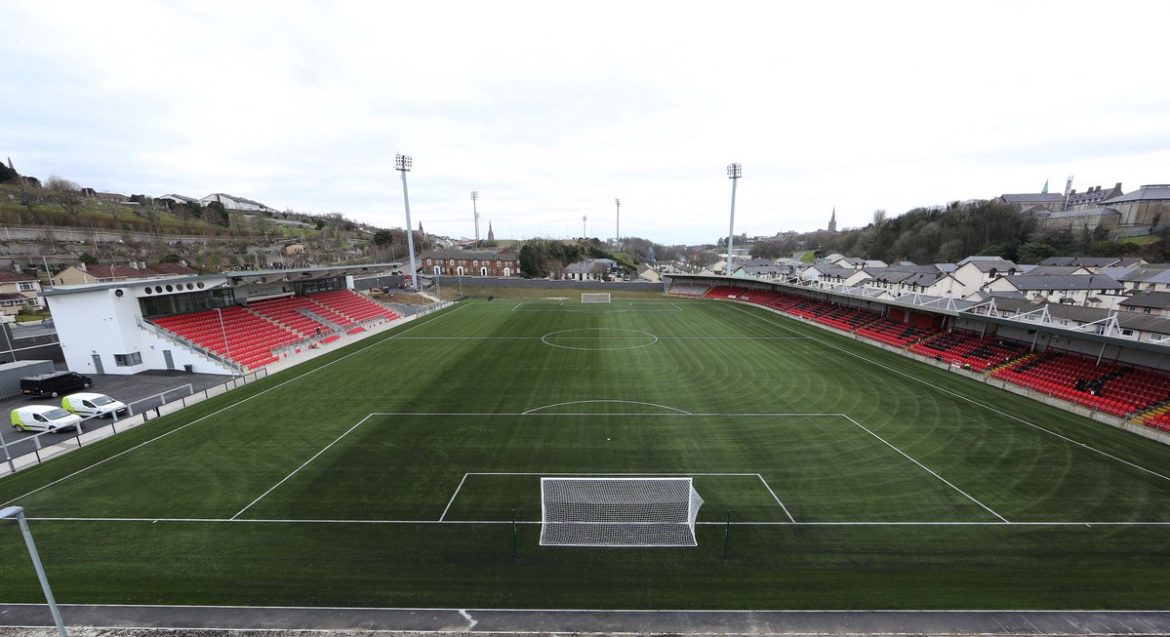 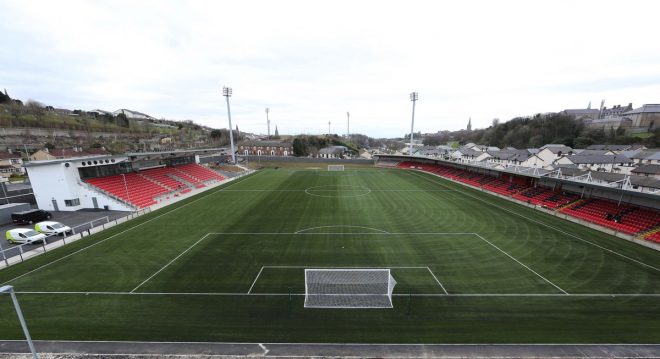 THE long wait is over and Derry City will play its first home game at the Brandywell in over a year.

The Candy Stripes host Limerick this evening (kick off 7.45 pm) at the revamped ground.

And with the multi-million pound redevelopment of Brandywell Stadium completed, one of the grand old ground’s quirks has been consigned to the footballing history books.

All online tickets for the match have been sold out.

The club has tweeted: “We’ve now sold out of tickets online – tickets only available at outlets.

“Purchase in advance, or risk not getting in :).”

The Brandywell slope, it is said, could inspire victory or hasten defeat.

Whether schoolboy or superstar, even the very best were challenged by the on-field incline.

During the development work, Derry City had to play all its home games last season at Maginn Park in Donegal.

City currently lie in ninth position after with just three points from its first four games.

Last Friday night, the Candy Stripes slumped to the their record League of Ireland defeat, losing 6-1 away to Shamrock Rovers.

Manager Kenny Shiels will be hoping  his team can put that performance behind them and returning to winning ways at the Brandywell.

Following tonight’s match, City will have another game this Friday, March 16, against Bray Wanderers.

It could have all been so different for a City side who held the upper hand in the first half and had a number of chances to break the deadlock.  Showing an unchanged side from last week’s win at Dalymount, City had the opening opportunity when a header from Toal flashed wide of Horgan’s goal.

The visitors were well in the game and Curtis and Patterson both had efforts deflected wide for corners in the opening stages.

As the home side settled they began to find their feet and Sean Kavanagh, who snubbed the Candystripes at the last minute to move to Rovers forcing Doherty into a save, pushing a shot away for a corner.

Rovers then missed a great chance to take the lead when a superb through ball from Kavanagh found Miele but one on one with Doherty, he fired wide.

City were forced into a change, when McDonagh had to be replaced by McDermott after shipping an early knock.

City hit back with Grace deflecting Patterson’s shot for a corner and then when Patterson was sent clear, his goal line clearance kept the scores level.  It was to be a costly miss, when Rovers took the lead before the break.

As a period of sustained pressure, the ball fell to Finn 25 yards out.  Tricking the Derry defence into thinking he would shoot, he played a sublime chip ball to Burke inside the box, who smashed it home.

The second half turned into a horror shock for the visitors, with captain Gerard Doherty centrally involved.  City fell two behind when that man Kavanagh showed real composure, cutting infield at the edge of the box and firing home.

City now looked lost at sea and Rovers sensed blood.  During a long period of treatment for Boyle, Finn gathered his players and decided some on field tactical discussions.

On 67 minutes a rushed pass from Doherty to Toal saw City lose possession and  fail to cut out the danger down their right, and the ball was fed to Finn, who fired home.

Questions will be asked of the City keeper who appeared to let the ball under his body.  It would get much worse for the City netminder just a moment later when he cleared the ball straight to Miele who found Burke, who finished easily.

Curtis and Patterson combined to send substitute Ronan Hale clear and his low finish was a consolation goal to City but Rovers were far from finished.

City went to sleep once again when a low cross found an unmarked Burke at the back post for his hat-trick.

City looked to have avoided a record defeat but in the final move of the the match Burke picked the ball up and stripped McDermott for pace, firing past Doherty.

It marked City’s 300th defeat in the League of Ireland and their record league defeat.