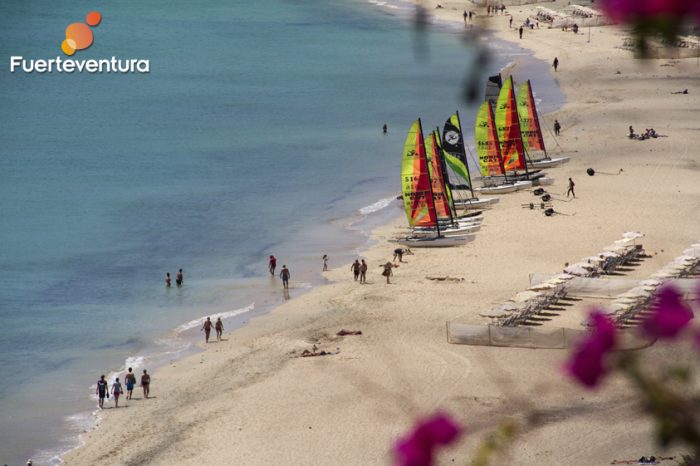 DD Travel feature…..Wind in the Wild West (of the Canaries) Make sure you pack layers. Sun hats and woolly hats.

Jumpers and shawls. It’s a little warmer in the south but by the afternoon the clouds appear and their obstruction of the sun makes for some cooler interludes.

Throughout the island there’s a fabulous sense of expanse both from the small population and the wide landscape. And then there are the cacti with their own distinctive shapes and character.

It’s a great place to get a sense of real desert, of the Sahara even (which is on the same parallel) as camels lope in their strides across the road.

For kite surfers this has become a top spot. They enjoy their guaranteed wind predominantly on the east coast while board surfers benefit from the west coast.

El Cotillo is a surfing town full of cool bars and restaurants for the dude community and the special restaurant is Vaca Azul. Golfers come from afar for their one spot of greenery.

I stayed first at the Gran Hotel Atlantis Bahia Real (www.atlantisbahiareal.com). It’s set on a white-sand beach bordering the Corralejo dunes and looks across at the Isla de Lobos and Lanzarote beyond.

Look out at the hotel spa, the ‘Bahia Vital’, for Daniella. No ordinary masseuse as my girlfriend lifted herself out of her chair she was pulled up and knew instantly that she was in great hands.

Indeed she left in great shape both literally and sensually as a result of Daniella’s intuitive understanding.

At the Spanish gourmet ‘Las Columnas’ they certainly push the boat out though hopefully not the belly! I enjoyed some pumpkin cream soup and a piquillo pepper filled with seafood, before resisting a menu of eight tapas.
I then expanded into a sea bass set in a rock salt case, a process of release from which mesmerised the neighbouring children. And all helped along with a salad of tropical fruits, cherry tomatoes and king prawns.
They typically mix fruit into their salads. To round things off I tried a chocolate soufflé with red fruits that were doused in a rosemary aroma and cardamom ice cream. All thoroughly thought through!

At the hotel’s Coco Beach Bar I loved the sensation of being surrounded by the waves that span and lapped around me. Before I tucked into a Salmorejo Cordoba-style with toppings I sampled a Canarian staple, namely ‘papas arrugadas’, wrinkled potatoes that come with their ‘mojo’ sauces of garlic, chili peppers, cumin, paprika and vinegar. For pudding I enjoyed a fruits of the season with apricot sorbet.
All accompanied by both Yaiza and Bermejo Dry white wine. Locally grown are the potatoes, bananas and tomatoes along of course with the fish that is caught locally including octopus and squid.

Corralejo is a town half for tourists (and many Brits find it reassuringly familiar with their shops and bars) and half for locals with Calle Iglesia a charming part.

It retains its fishing village atmosphere and the locals are animated and gesticular in similar fashion to those along the Mediterranean. The island is totally safe both for old and young alike. Indeed the traditional British bucket and spade holiday is much in evidence.

My next stop was at the http://www.barcelo.com/en-gb/hotels/spain/canary-islands/fuerteventura/occidental-jandia-royal-levelOccidental Jandia Royal Level Suite.

My room was set on a hillside high above with a wonderfully panoramic view out over the long strand of beach. The hotel is fully functional and there’s definitely something for everyone. Kids are given a variety of activities to enjoy while parents get a chance to unwind.

High season is July and August as well as Easter and Christmas. I strongly recommend Fuerteventura strong winds and all.

Classic Collection Holidays (0800 047 1064; classic-collection.co.uk) offers a two centre holiday of 3 nights at Gran Hotel Atlantis Bahia Real on a bed & breakfast and 3 nights at Occidental Jandia Royal Level Suite on an all inclusive basis from£1279 per person.

Price based on 2 adults sharing and includes return flights from London Gatwick to Fuerteventura (flights available from up to 16 UK airports) and all private transfers. Departing April 2018.