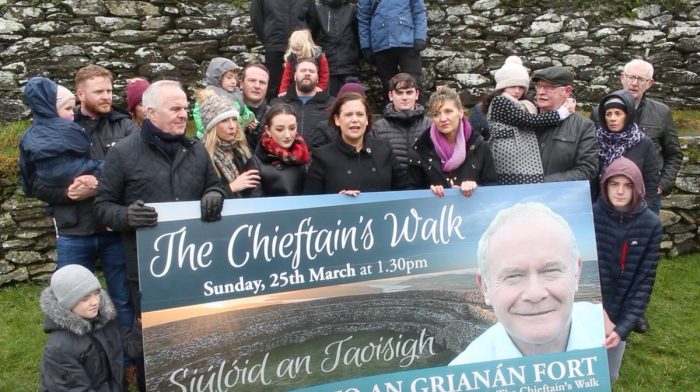 CHARITY WALK TO BE HELD IN MEMORY OF MARTIN MCGUINNESS

THE family of deputy first minister Martin McGuinness have launched a charity walk in his honour to help raise awareness of the condition which claimed his life.

The charity walk, which will go from Glenowen in Derry to Grianán, Co Donegal is to raise funds for the North West Cancer Centre at Altnagelvin Hospital and to help raise awareness of amyloidosis, the rare genetic disease Mr McGuinness was diagnosed with before his death in March of last year.

Speaking at the launch event at Grianán Fort on Sunday, Martin’s son Fiachra McGuinness said starting the charity walk was the “obvious thing to do”.

“Grianán was a very special place for my father. He loved to walk up to the fort so when we were considering an event to hold in his memory, a walk from Glenowen to Grianán was the obvious thing to do.”

“We are hoping as many people as possible will get involved and register online to take part. We want to raise awareness about amyloidosis and all proceeds will go to the North West Cancer Centre at

Altnagelvin Hospital, which again is something very much associated with my father.

He was a driving force behind ensuring the centre was established in the first place and it will be fitting if his legacy can help support the fantastic service being provided there.”

Every registered participant in The Chieftains Walk will receive a commemorative medal. Entry fee is £10.

You can register via the Chieftain’s Walk Facebook page or online at register.primoevents.com/ps/event/TheMartinMcGuinnessChieftainsWalk.

CHARITY WALK TO BE HELD IN MEMORY OF MARTIN MCGUINNESS was last modified: January 29th, 2018 by John