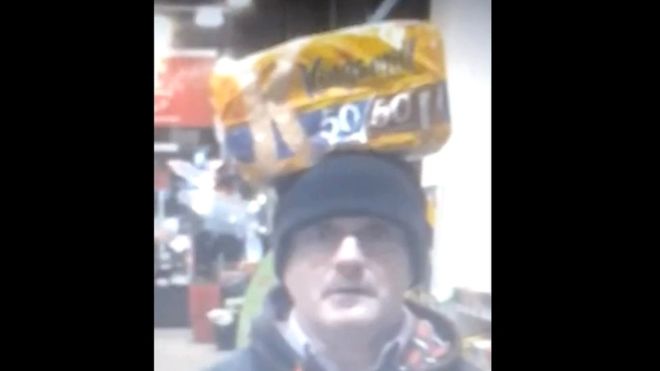 He reiterated his call for the Sinn Féin leadership to finally apologise for the Kingsmill Massacre.
The suspension comes after McElduff was summonsed to Sinn Fein headquarters in Belfast to explain his tweet of himself with a loaf of Kingsmill bread on his head.
The tweet was posed on the 42nd anniversary of the Kingsmill massacre when ten Protestant businessmnen were shot dead by a ruthless IRA gang.

Mr Eastwood said: “The last number of days for Sinn Féin has been about desperately firefighting a PR storm – it hasn’t been about enforcing proper discipline.

It most definitely hasn’t been about addressing the hurt caused to the Kingsmill victims and their families.

“In one of its first tests, it is clear the new Sinn Féin leadership hasn’t had the authority to do the right thing.

“This implied that the Sinn Féin leadership were of the belief that Barry McElduff had acted intentionally to mock the victims of the Kingsmill Massacre.

“This afternoon though, Sinn Féin are telling these victims and their families that the sanction for that hurt is a 3 month suspension.

“There also remains no full explanation from Sinn Féin as to what the point of the original post was and what explanation Barry McElduff offered this afternoon.

“People across the North will genuinely struggle to figure out what the actual punishment has been for Barry McElduff.

“As of now Barry McElduff remains an abstentionist MP, who remains on full pay.

“The only sanction the Sinn Féin leadership has seen fit to hand down to Barry McElduff is that he is now suspended from attending Sinn Féin meetings for the next 3 months.

“’d also like to repeat what I said this morning.

“The events of the last number of days have raised a deeper issue on how all of us in political life deal with our past.

“The provisional republican movement has never expressed full remorse for the specific murders it was involved in, including those at Kingsmill.

“That is a reality Sinn Féin has never faced up to.

“It is why their public pronouncements about reconciliation have always fallen short and have never gained trust amongst very decent people in the unionist community.

“After a week where the task of reconciliation has once more been undermined, I would again call on the Sinn Féin leadership to ease the hurt caused to these victims by finally apologising for the Kingsmill Massacre.”