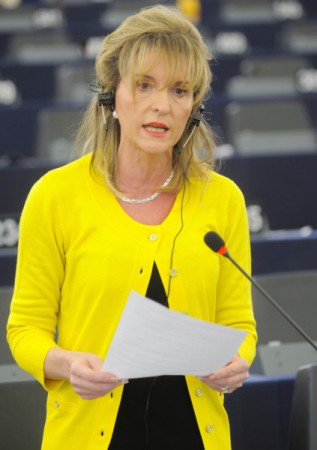 SINN Féin MEP Martina Anderson has told the EU’s lead Brexit negotiator of the need to protect the Good Friday Agreement from Brexit.

“I met with the EU’s Brexit negotiator Michel Barnier in Strasbourg to remind him of his responsibility to protect the Good Friday Agreement in all its parts, as he is mandated to do.

“I also made it clear to him that if sufficient progress is to be made to allow the Brexit negotiations to move on to the next stage then the issues around Ireland, the border and citizens rights must be addressed and the British government must accept the need to protect the Agreement.

“He assured me that he will not to do anything to undermine the Good Friday Agreement and said work is underway to establish a regulatory framework on areas of north south co-operation.

“I  also presented him with a copy of the independent legal advice which shows that securing special status for the north within the EU is possible and reminded him that is the best way to ensure the protection of the Good Friday Agreement and the rights of citizens in the north,” she added.