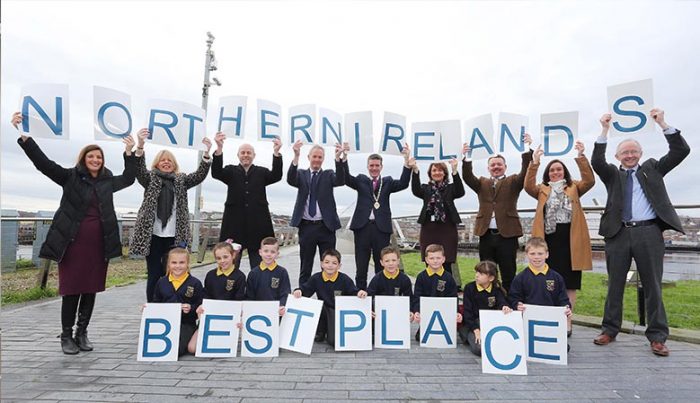 Nearly 4,000 people voted on a shortlist of 10 places, with Derry’s Historic Core, Peace Bridge and Ebrington emerging as the most popular place.

Rathlin Island, the scenic and only inhabited island off Northern Ireland, and Armagh’s historic city centre, famed for its Georgian architecture, are second and third, respectively.

Derry’s chequered, and at times violent, history – the 16th century plantation, the 1920s partition and the Troubles which started in the late 1960s – shaped the city’s physical and social form.

Following the 1998 Good Friday Agreement, the city’s prospects changed, with planners playing their part in regenerating and reunifying the city.

In the lead up to its year as the inaugural UK City of Culture in 2013, the Peace Bridge was unveiled creating not just a pedestrian and cycle link between the Protestant and Nationalist communities on either side of the Foyle River, but a symbol of unification.

The city’s planners then used the Peace Bridge as a catalyst for regenerating languishing parts of the city.

It links the once run down Ebrington area, now a regenerated square with new shops, restaurants and cultural spaces, to the redeveloped waterfront and Guildhall area on the opposite side.

“Being crowned the Best Place in Northern Ireland is recognition of the outstanding work planners have made to the regeneration and reunification of the city.

“Good planning has been pivotal in the city’s hugely successful, ongoing waterfront regeneration focused around its historic core, the Peace Bridge and Ebrington barracks. Together these elements have re-defined the city as a great place to live, work and for new investment.

“We are absolutely delighted to have secured this prestigious accolade and it is testament to fantastic work that has been done to regenerate the city through close collaborative working.

“This award reflects the positive impact the Peace Bridge and Ebrington have had on the lives of the people of the city and district.

“The Peace Bridge and Ebrington are significant regeneration investment projects that have had a huge impact on both the local community and visitors.

“The projects have both contributed to our local economy and tourism offering, as well as our overall health and well-being.

“They symbolise the city’s positivity and aspirations for the future and I am delighted that the city has been acknowledged for such a prestigious accolade and I would like to extend my congratulations to everyone involved.”

“Congratulations to our maiden city Derry on winning the very closely run NI Best Places Competition. Planning has long left a mark on our only remaining walled city, laid out in the 17th century.

“The recent regeneration of Ebrington Barracks, the construction of the pedestrian peace bridge and the continued protection of the City Walls and Guildhall demonstrate how the planners have successfully protected the built environment and improved connectivity between the Cityside and Waterside.

“Planners have been central to the sensitive regeneration of the city and maintenance of the original Renaissance layout, along with the fine examples of Georgian, Edwardian and Victorian buildings.”

Nominations for Northern Ireland’s Best Places were submitted from the public in April. A Judging Panel whittled the nomination list down to 10 finalists, which the public voted for over six weeks in September and October.