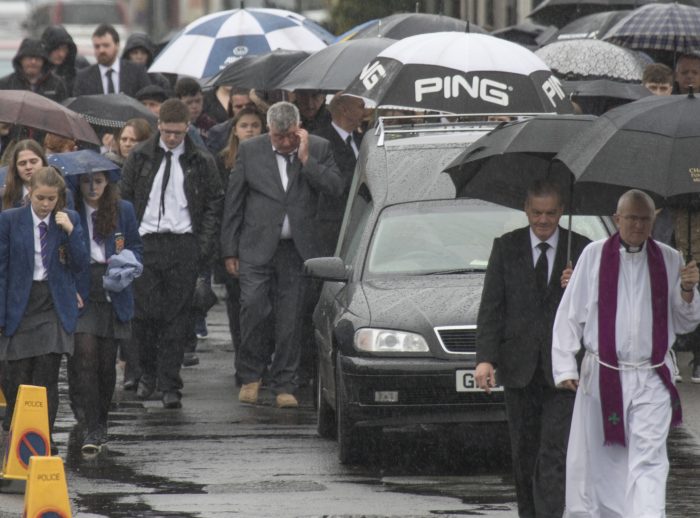 The remains of young Hannah Mooloy is taken from St Patricks Church in Castlederg to her last resting place as family walk behind. (North West Newspix)

FAMILY and friends of Hannah Molloy have paid their final tearful farewells as her funeral took place in her home village of Castlederg today.

Hannah, who turned 18 last month, was killed in a single vehicle accident outside Castlederg in Co Tyrone on Saturday morning.

Hundreds of mourners attended the Requiem Mass at St Patrick’s Church to say their final farewells.

Described as “bubbly” and “kind-hearted,” Hannah’s best friend Ciara Martin said she was “like a sister.”

“Hannah was bubbly; that’s a really good word to describe her. She had a really, really big heart. There wasn’t a bad bone in her body,” said Ciara.

The pair had planned to join other former Loreto pupils who had enrolled at Queen’s University to celebrate fresher’s week in Belfast this week.

A devastated Ciara said: “Hannah was excited, it was a new start for us. I’m still in shock at what happened, just numb.”