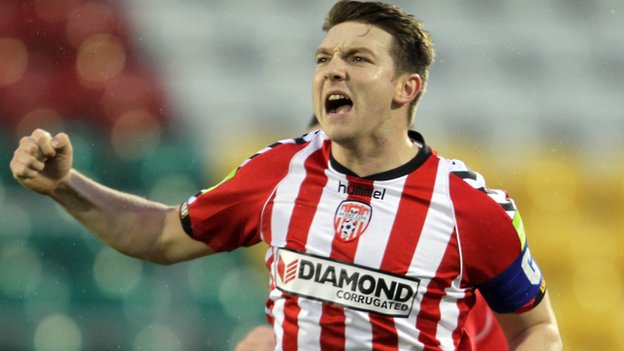 SLIGO Rovers have confirmed the appointment of Kevin Deery as the club’s assistant manager until the end of the season.

The 32-year-old spent two seasons as manager of Institute, leading them to successive promotion play-off matches and an Intermediate Cup win.
Deery made 302 competitive appearances as a midfielder during almost 12 years at Derry City.
Gerard Lyttle has moved to appoint Deery following a vacancy in his coaching team.
Deery said he was grateful to Lyttle for the opportunity.
He commented: “I’m want to try and make a positive impact on the team and be myself around the place. I’m delighted to be here to work at such a fine club like Sligo Rovers.
“There are big games coming up immediately so we’ll be working hard and I’ve no doubt there’s a huge battle ahead for every team in the bottom half of the table.
“But I’m excited at the chance to work with Gerard and the players and we’ll be giving it our all to keep the club in the top-flight.”
KEVIN DEERY QUITS ‘STUTE’ TO JOIN SLIGO ROVERS AS ASSISTANT MANAGER was last modified: September 13th, 2017 by John