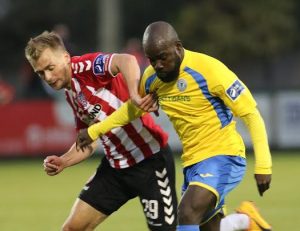 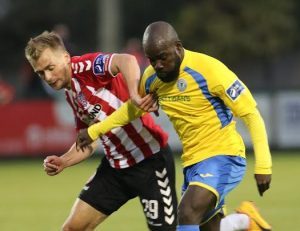 LAST night’s game at Maginn Park was to raise money for the Inishowen Flood Relief Fund and while a low attendance turned out, the game served as a useful run out for both sides.

With Kilian Cantwell suspended and Packie Mailey injury, Blaney gave an assured display here that suggests he could well be thrust into the spotlight next weekend. 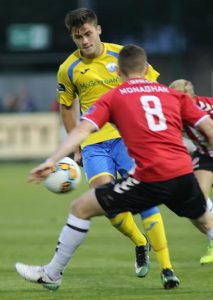 Derry took the lead on 66 minutes. Rory Patterson created the opening with a delightful pass on the edge of the area and Joxef Dolný finished well past Peter Burke.

It was Dolný’s first Derry goal since the Slovak signed from Podbeskidzie Bielsko-Biała in July.

Dolný whizzed another effort not far wide and Lukas Schubert drilled off target from 20 yards, but Harps got back on level terms when Morrissey edged Derry ‘keeper Eric Grimes to turn home,

Derry might’ve sneaked the win, but Schubert was denied by the post.

Pascal Millien forced a good save from Grimes in the 13th minute. After combining well with Ibrahim Keita, Millien forced Grimes to turn over the top.

Millien had been rumoured to be on his way out of Finn Park in recent weeks, but the Haiti international showed up well on the left flank and, on the half-hour, Millien almost caught Grimes out with a bending free kick that the Derry ‘keeper was glad to see fly over. 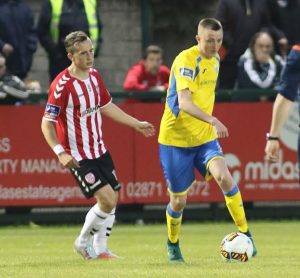 Rory Patterson headed wide at the other end and Burke had to be at his best to, first, save Aaron McEneff’s free and, once Derry recycled the play, then to deny Schubert in the follow-up.

Schubert asked questions of Burke again later in the half, but the Harps netminder beat away a super hit from the Austrian. 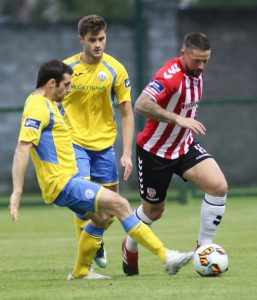