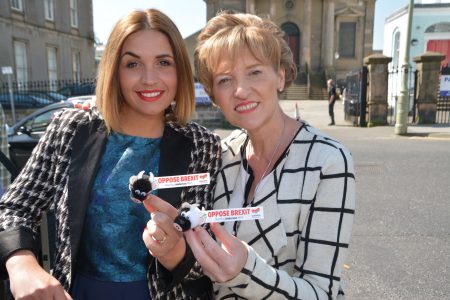 NO CERTAINTY OVER DEBIT CARD SURCHARGES BAN AFTER BREXIT – ANDERSON

SINN Féin MEP Martina Anderson has said people here may not be able to avail of new measures to be introduced to ban surcharges on debit and credit cards after Brexit.

Martina Anderson said: “Plans announced to ban surcharges on credit and debit cards will no doubt be welcomed by consumers.

“This will be brought in from January next year in line with a European Union directive.

“While this will help consumers once it is introduced, particularly when it comes to making airline bookings online, there is no certainty that it will be retained post-Brexit when the British government will no longer be bound by EU directives.

“This is just one of the many uncertainties, like the future of roaming charges, that we are facing as a result of the directionless Tory Brexit agenda.

“That reality is now being widely recognised, including by one of the authors of Article 50, Lord Kerr, who has now warned of the ‘disastrous consequences’ of Brexit.

“In order to avoid this uncertainty we need to secure designated special status for the north within the EU.

“We have been securing support for that across Europe and we need to see the Irish government making it a priority in the current Brexit negotiations,” she added.