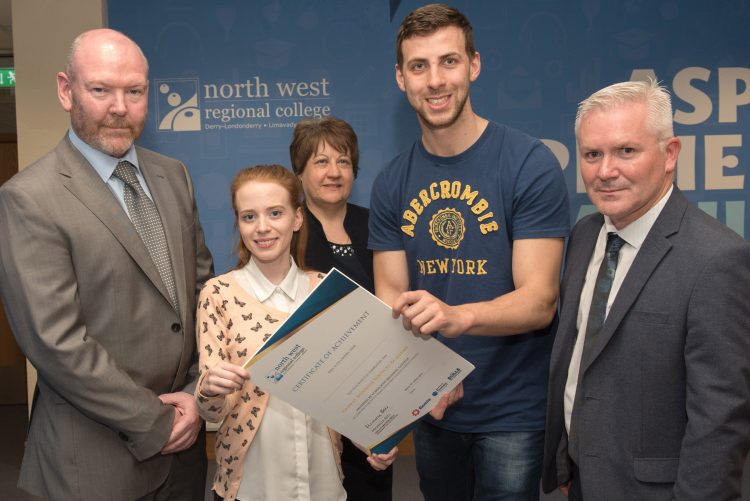 Rebecca McDermott (second from left) and Ian Bratton (second from right) pick up their certificates of achievement at North West Regional College after completing the five week Global Business Services Academy. Also pictured from left are James Casserly, GBS Director for Bemis Europe, Kathleen McCaul, Head of Business, NWRC and Mark McConville, Client Executive with the Department for the Economy. (Pic by Martin McKeown).
The Academy is a partnership between the College, Department for the Economy and Global Packaging Giant, Bemis.

A TOTAL of 16 participants have just completed a five week academy at North West Regional College (NWRC) designed to equip them with skills to secure employment with Bemis Company, a global packaging company.

Bemis Company with annual revenues of $4Billion (USD) recently announced that they are establishing a European Business Service Centre in Campsie, Derry~Londonderry creating up to 95 positions.

To help recruit for these roles, in partnership with the Department for the Economy and NWRC, Bemis launched a five week Global Business Services Academy to equip participants with the skills required to fulfil business financial service roles in the new Centre.

The participants who were all previously educated to HND or Degree level have now gained industry recognised qualifications as a result of the five week programme.

James Casserly, GBS Director for Bemis Europe congratulated all the participants who will now go forward to take part in a competency- based interview.

He commented: “This is the first time that Bemis has used this Academy based-process which was suggested to us based on the number of candidates we are recruiting for.

“Bemis is centralising certain finance activities into shared service centres, and Derry has been selected as the location for Europe.

“Given we are looking to expand our workforce so significantly, we needed to find new way to identify candidates with the correct skill set and who are the right fit for our organisation.

“The Academy was a strategy that we decided to pursue and a really good way of finding talent.”

Kathleen McCaul, Head of Business, at NWRC congratulated all the participants who were this week presented with a Certificate of Achievement from the Global Business Services Academy.

She commented: “During the past five weeks, participants have taken part in modules which include Principles of Customer Service; Soft Skills Development, Bookkeeping and Accounts Receivable, ECDL, Advanced Excel and Interview Preparation.

They now move on to the interview stage and we are confident of them progressing from the Academy into full time employment.”

One of the participants of the Academy Rebecca McDermott said she had acquired skills that she can now take into the workplace with her.

She said: “When I found out about the Global Business Services Academy I knew it would be right up my street as I had just moved home after travelling and was looking for work after achieving a Business Degree at Liverpool.”

“We learned a huge amount during our five weeks. It was hard work, but worth it.”