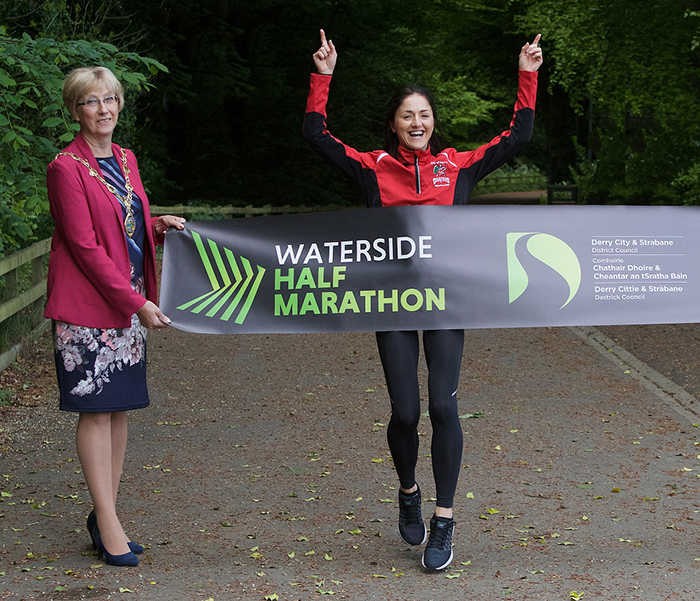 Additional features to the event, combined with the upsurge in the popularity of running locally, led to unprecedented numbers taking part in 2016 and this year’s race on Sunday September 3rd is expected to break all records yet again.

“The Waterside Half Marathon is one of the longest running athletics events in Northern Ireland, it goes from strength to strength each year and has developed a reputation as a well organised and efficiently managed race to take part in,” she said.

“The redesigned route has proven particularly popular with runners in recent years taking them along both sides of the river and showcasing our scenic parks, greenways and bridges before finishing at the St Columb’s Park running track.

“The heightened popularity of running can clearly be seen along the roads and greenways of our City and District and this is the perfect opportunity for athletes to give themselves a date to work towards by registering now.”

The Waterside Half Marathon is 13.1 miles in length and starts at 10.00am in Ebrington Square before moving down the Limavady Road and onto Waterfoot Park and the Gransha Greenway, after passing over the Foyle Bridge, runners will make their way through the Bay Park and along the river before finally crossing the Peace Bridge and finishing at St Columb’s Park.

Festival and Events Manager at Derry City and Strabane District Council, Jacqueline Whoriskey, encouraged local people of all levels to consider entering the race, noting that the relay option may be a suitable alternative to runners who are not ready for the full course.

“We are delighted to announce the return of the Waterside Half Marathon and are already looking forward to the sight of hundreds of runners weaving their way around the city on September 3rd,” she said.

“We have extended the field to 2,000 this year while we can accommodate a further 300 participants in the three person relay option which is a great way for runners of any level to feel part of the action by doing a four mile section of the route.

“The closing date for entries is Monday August 14th but we would urge people to register early as we expect the event to sell out.”

The race fee for runners and wheelchairs is £22 while a three person relay team costs £60.

All half marathon entrants must be 17 years of age or over on race day and race packs can be collected from the Foyle Arena on Friday September 1st between 12 noon and 8 pm and Saturday September 2nd from 10 am to 5 pm.

MAYOR OFFICIALLY OPENS REGISTRATIONS FOR 2017 WATERSIDE HALF MARATHON was last modified: May 18th, 2017 by John