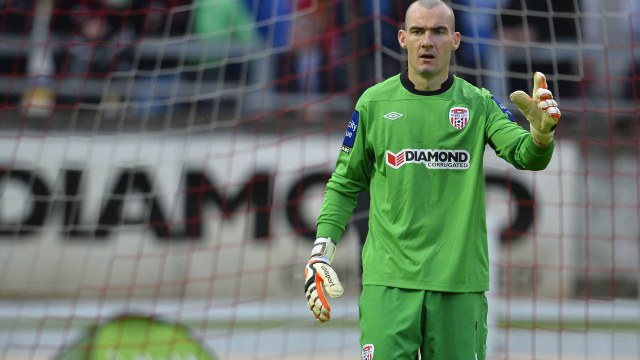 DERRY CITY played out a scoreless against Galway United this evening at Eamonn Deacy Park, a point being enough to lift the Tribesmen off the foot of the Premier Division table.

As Padraic Cunningham was played in down the right flank in the fifth minute, he took the ball towards the edge of the area as Doherty came out to meet him, handling outside the area in the process.

However, only a yellow card was shown.

Gavan Holohan produced the first shot on target, testing Doherty with a right-footed drive from distance that the ‘keeper did well to save. Immediately afterwards, Ronan Curtis responded with a chance of his own that required the alert Lee Grace to produce a goal-line clearance after the midfielder fired from just inside the box.

Derry’s Curtis then had the best chance of the opening half, swivelling inside the area before poking the ball at goal in one fluid movement, only for Conor Winn to tip around the post for a corner.

Following the restart, United again produced the first effort on target after Cunningham acrobatically connected with Gary Shanahan’s cross but it sailed into Doherty’s hands.

Seconds later, Josh Daniels, had a good chance for the Candystripes, cutting in from the right flank before firing a low shot that Winn scooped up with relative ease.

David Cawley and Ronan Murray began to have an influence approaching the hour mark, pinging balls in for Cunningham to contest with Dean Jarvis, but between offside calls and good defending, they failed to capitalise.

Then, United had three chances in a row – a scuffed Shanahan effort inside the area that should have gone in, an uncontested Kevin Devaney header that struck the feet of Doherty form six yards out and a Murray shot at the back post, assisted by the industrious Shanahan on the right flank, that was also saved.

In the end, neither side could produce a clinical finish and the spoils were shared.