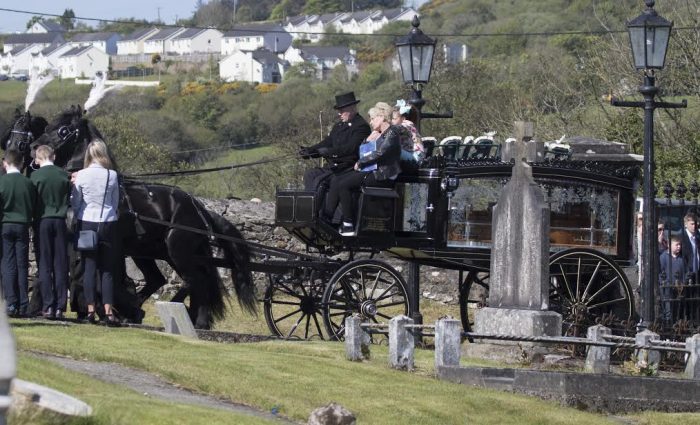 MOURNERS at the funeral of Donegal teenager Nathan Farrell this morning were told to ‘learn from this’ and to ‘wake up’.

Parish Priest Fr Francis Bradley told a packed St Mary’s Church in Cockhill that the death of the ‘superb young man’, who had been due to start a new job at Inishowen Engineering on Tuesday, should serve as a warning to take care on the roads.

The 18-year-old and his friend Nathan Dixon-Gill died in the early hours of Saturday morning when the car in which they and three friends crashed between Moville and Quigley’s Point.

“Regret is not the best way to respond to Nathan’s death and the deaths of so many like him – resolve is better, that resolve to make our roads safer by driving more cautiously and taking our time,” Fr Bradley said in his Homily.

“It is an uneasy feeling to bury someone like Nathan who ironically was so into protecting everyone else but who died in this sad way.

“When I see signpost after signpost around this parish saying ‘Wake’, my heart always drops a little.

“Over the past few days, when I saw these signs, I felt they should have read, “Wake Up!’

“I say this not only to you, as young people, but I say it to everyone, and I say it to myself: ‘Wake up!  Be careful as you drive.  Be mindful as you carry a precious cargo with you.  Be prayerful as you get into your car and be thankful as you get out of it.’

“Because of the events of Saturday morning, along another road, many hearts and broken and minds confused.  As in the Song of the Suffering Servant, Nathan’s life on earth too has been cut short 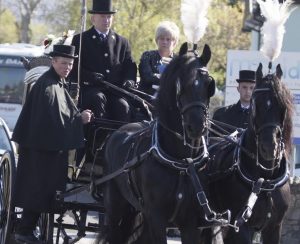 Nathan was a young man of deep faith who slept with a relic under his pillow, and Rosary Beads were among the gifts carried to the Altar.

Other items included a family photo, and a toy digger and hair gel, to represent Nathan’s hobbies.
Fr Bradley said: “His Mammy’s blue-eyed boy, even as a child, even if it got him into bother, he would repeat exactly what he had been told, or what he had heard.

“He loved getting home from his work in Dublin, getting changed, working his hair with gel, and innocently lapping the town with his friends.

“When he went missing one day as an eight-year-old, he was found with his go-kart tractor parked at the back of a wake house, sitting in his wellies with all the adults, expressing his sorrow for their loss and asking, ‘what’s the world coming to anyway!’

It is a question which we all ask today.  And we must confront it as we confront everything else.  Nathan was up-front and honest in what he asked and what he said.

“Nathan was, by nature, proactive and respectful of everyone.  He was the one to whom you turned when something needed fixing around the house.”

Along with friends, including 17-year-old Nathan Dixon-Gill, who was buried in the same Church yesterday, Nathan had planned a summer holiday to Santa Ponza.

Fr Bradley said: “As it happens, they died together, and now they will be buried close by each other – dressed exactly the same.  But it is the robe to eternal life that we pray they will now wear for eternity.”

The Parish Priest had a stark message for the packed Church when he said: “To you, his many friends, and especially those who survived the accident, he’ll be saying: ‘Guys, learn from this, learn from me, learn from God. Cherish life and act accordingly’.”

‘LEARN FROM THIS….WAKE UP’: PRIEST TELLS MOURNERS AT FUNERAL OF SECOND DONEGAL CAR CRASH VICTIM was last modified: May 4th, 2017 by John