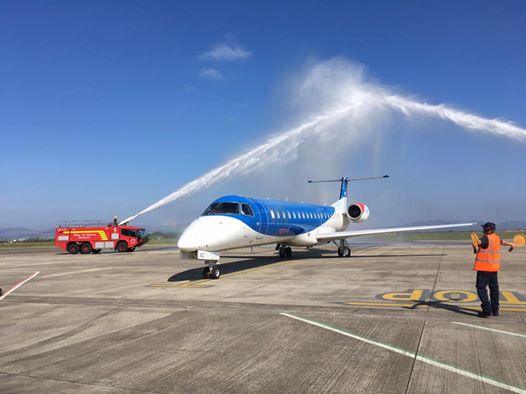 THE first new BMI flights between City of Derry Airport and London Stansted have taken off.

The airline will operate two return flights each day, except for Saturdays which will have one flight each way.

The service is the first air route in Northern Ireland to be backed by the government through a public service obligation.

Ryanair ended its service between Londonderry and London last year.

The re-introduction connecting Derry with London has been welcomed by SDLP Foyle MP Mark Durkan, a frequent traveller to Westminster.

“I supported the City of Derry Airport application and lobbied the British government for PSO support for the twice daily service to London. BMI’s new Derry to London Stansted route will help release the best potential of the airport – not just for this city but the entire North West.

“This re-instated service will be of great assistance to business and leisure passengers alike – on both sides of the border.”

The Department for Transport provides funding for some air services to London that may otherwise be lost if the connection is “vital for the economic and social development” of a particular region.

John Kelpie, the chief executive of Derry City and Strabane District Council, said it was a great day for the city and north-west.

“This is part of a wider picture to grow businesses and sustain employment – this new flight will help to do that,” he added.

“It provides business connectivity, which we have been lacking into London for quite some time.”

Roy Devine, the chairman of City of Derry Airport, said that it was a “significant” day.