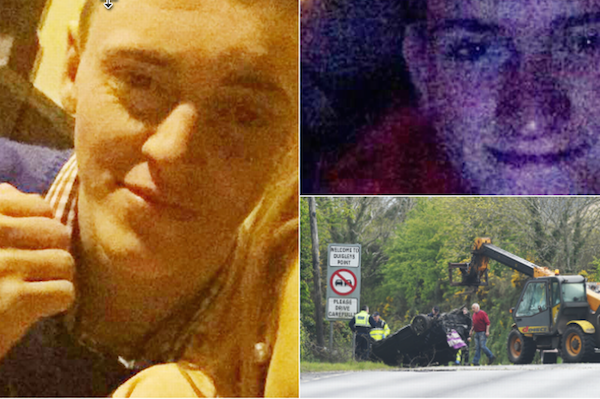 THE two friends killed in a single-vehicle car crash in Donegal yesterday have been named as Nathan Fullerton and Nathan Farrell.

The young men were among five friends whose car crashed into a wall and then struck a tree outside Quigley’s Point in Inishowen at around 3.30 am.

All five are from the Buncrana area.

The three other young men in the crash are recovering in hospital with various levels of injuries but none are understood to be life-threatening.

One of the men has since been transferred to the Royal Victoria Hospital in Belfast to be treated for a serious spinal injury.

Local Sinn Fein Senator Padraig Mac Lochlainn said he knew the dead boys’ families and he was simply devastated for them.

He said “Inishowen has suffered more than most as a result of tragedies on our roads. We have buried far too many of our young people.

“The entire community is devastated for someone so young to be taken from us. We’re all so weary of roads deaths.”

He added that the latest double-death on the roads of Donegal show how fragile life is for young people behind the wheel.

“It just shows how fragile our young people are in cars. At the end of the day, it’s just a bit of thin that’s protecting you.”

Emergency services rushed to the scene fo the crash on the Redcastle side of Quigley’s Point on the shores of Lough Foyle.

The latest horror crash on the peninsula’s roads came just hours after the Head of the Donegal Garda Traffic Corps pleaded with people to take extra care on the roads of Donegal.

Inspector Michael Harrison had warned people of extra volumes of traffic on the roads considering the Bank Holiday Weekend.

Thousands of cross-border visitors traditionally travel across the border from Derry and other parts of Northern Ireland into Donegal where many have holiday homes.

Inspector Harrison had warned “I am appealing to people to take extra care on the roads this weekend considering the high volume of traffic coming into the county.

“I am asking people to slow down, wear their seat belts and never to drive under the influence.

“We will have checkpoints across the county this weekend and if people break the rules of the road, they will be apprehended.”

Four people have died so far on Donegal’s roads this year compared to just one for last year at this time.

Derry mum’s relief at baptism for her...