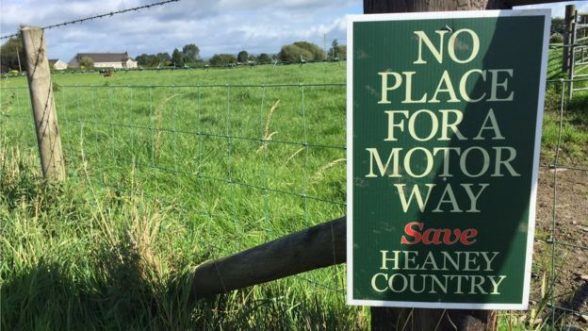 AN environmentalist has lost a court case against the A6 Derry to Belfast route of a major road scheme close to landscape made famous by poet Seamus Heaney.

Chris Murphy had gone to court to contest the route of the A6 dual carriageway at Toomebridge.

A section of the £160m new road skirts Lough Beg just outside the Co Antrim village.

Lough Beg is an important habitat for birds, including migratory swans, and has international protection.

Mr Murphy had claimed that the proper environmental checks had not been done and the decision to proceed had been based on out-of-date surveys.

But lawyers for the Department of Infrastructure had argued that the assessments were based on accurate and regularly-updated information.

They said the chosen route did not cut through the protected wetland.

Mr Murphy told the court he may appeal as he believed there was a case in law to be argued.

He now has six weeks in which to launch his appeal.

In a statement, the Department of Infrastructure said it would progress work on the road as soon as possible.

“Today’s decision means 18,000 road users and the local community are set to directly benefit as the new dual carriageway will reduce journey times and improve road safety,” it said.

“The scheme is predicted to result in a saving of almost 600 collisions over its 60 year economic life.

“The ruling has also recognised the care and attention we take, with the statutory environmental bodies, to preserve, protect and develop environmentally sensitive areas under consideration for road development.”