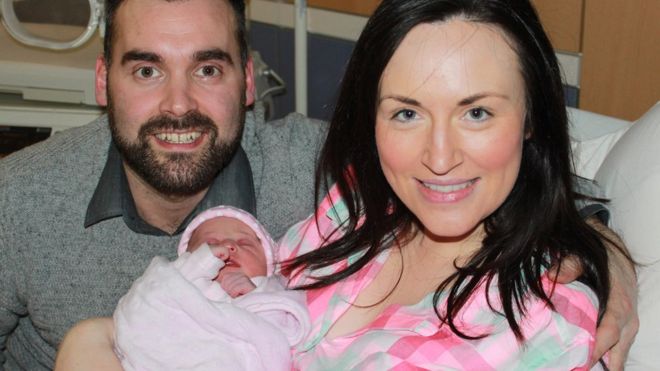 Paul Doherty and wife Georgina with their baby daughter. PIC: By NorthWest Newspix

EXCLUSIVE: A relieved mother has revealed how her husband used his shoelaces to tie their new-born baby’s umbilical cord after she gave birth in the back of the family car.

Paul Doherty thought he had plenty of time when his wife Georgina suggested it was time for them to travel to give birth to their fourth child on Saturday afternoon last.

But the Burnfoot couple hadn’t planned on their baby daughter Saphia arriving earlier than planned.

Georgina began having labour pains just after 11.30am and began her preparations to travel the short journey across the border in Derry’s Altnagelvin Hospital.

But Paul was forced to pull in at the side of the road and help deliver his daughter. A few minutes after they started their journey at approximately 1.39pm, off the Main Buncrana Road, baby Saphia was born.

Georgina revealed how Paul used his shoelace to tie the umbilical cord and then wrap the baby in a coat to keep her warm.

Georgina said “It all happened so fast. We thought we had time but things happened so quickly.

“Paul managed to tie the umbilical cord using his shoelace and before we knew it the ambulance had arrived. We kept her warm with a coat we had in the car with us until the ambulance arrived a few minutes later.

“Paul was very relaxed about it all. I suppose he had no choice really and she came so quickly in the end.”

The couple, who live in Burnfoot, were then taken to Alnagelvin Hospital where baby Saphia was given a medical check and weighed it at a very healthy 7lb 2oz weight.

The couple were joined by their other three children, Jake, Teigan and Shay as they visited their new sister in hospital just a few hours later. Amazingly, mother Georgina and baby Saphia were both discharged the next day with a perfect bill of health.

Georgina said everyone was doing fine and her other children now have a great story to tell their friends.

“They all think it’s great that they have a new sister and that she arrived so quickly.

“Myself and Paul are just relieved that Saphia is healthy,” she added.