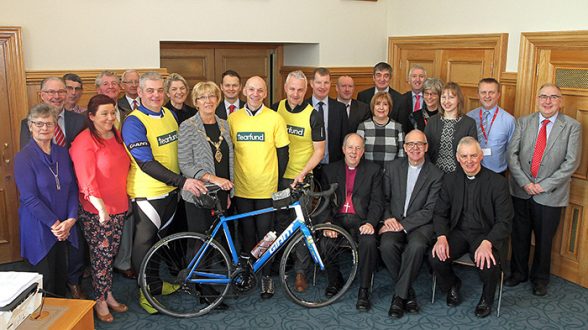 MAYOR HOSTS RECEPTION FOR ‘CYCLE OF HOPE’ ACROSS RWANDA

The ‘Cycle of Hope’ team includes a sculptor, a barrister and Northern Ireland’s first black Presbyterian minister and their aim is to raise £40,000.

Tearfund is one of the Mayor’s charities for her year in office and Alderman McClintock noted that the funds raised from this initiative will go towards helping people living in grave poverty without the fundamentals that most of us take for granted.

“Tearfund is a wonderful charity that works in partnership with Christian agencies and churches worldwide to tackle the causes and effects of poverty,” said Alderman McClintock.

“Not everyone is fortunate enough to have food, money or possessions and these are the people Tearfund help most.

“I fully commend the cyclists who have agreed to this exhausting challenge and, while I am certain it will be a testing few days, I am equally certain it will be worthwhile in raising essential funds for the charity and raising awareness of poverty.”

Thursday’s launch came just one day before Holocaust Memorial Day, a poignant time to mark large-scale atrocities such as the one suffered by the people of Rwanda in 1994 which left over one million people dead in just 100 days – almost half of Northern Ireland’s current population.

The country has been transformed through peace and reconciliation work in the last two decades but the marks of inter-tribal conflict are still evident with many still struggling to survive.

Tearfund works on the ground in the places of greatest need, bringing aid and emergency supplies as well as long-term support for communities and families, involving livelihood training, counselling and community facilitation.

‘The Cycle of Hope’ will involve a team of 16 people cycling over 180 miles in three days, often at high elevation.

“The cyclists will also visit Tearfund projects across the country, focusing on peace and reconciliation work and on the alleviation of poverty amongst those in greatest need – people whose lives have gone from despair to hope.

Paul Francis, from Tearfund, said: “This cycling challenge will be physically difficult. As a team, we’ve been training for months.

“But we’re looking forward to seeing first hand how people’s lives have been changed, turned from despair to hope, thanks to the work of Tearfund.

“It’s wonderful to have the support of Mayor McClintock as we embark and we look forward to her joining us next time.”

MAYOR HOSTS RECEPTION FOR ‘CYCLE OF HOPE’ ACROSS RWANDA was last modified: January 27th, 2017 by John