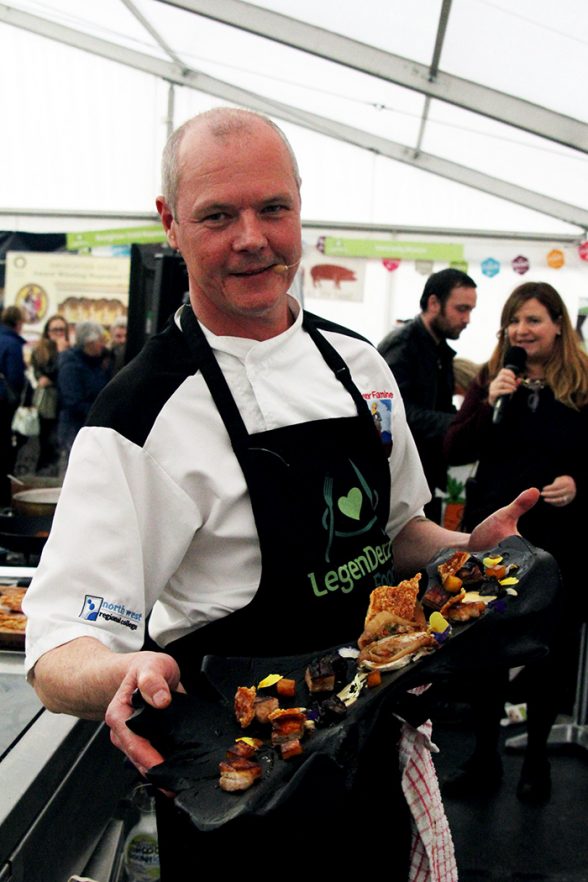 LegenDerry, which is Council’s premier food festival attracting upwards on 36,000 visitors, will be held again this year in Guildhall Square and the historic Guildhall itself from March 17th-19th sponsored by Tourism NI and DAERA’s NI Regional Food Programme as part of the St Patrick’s Day Spring Carnival.

It is one of six entries from across Northern Ireland to make the cut in the ‘Best NI Food Event or Festival’ category of the Awards which are selected by a judging panel made up of highly respected food writers, critics and hospitality experts.

As well as the seven category winners to be announced during a black tie evening and five course banquet at the Culloden on Thursday, February 2nd, the judges will award ‘Destination Delicious’ to a food destination/area in Northern Ireland that ticks all the boxes for nurturing and growing local food and hospitality opportunities, combining both to create a key destination for tourism.

Congratulating Derry City and Strabane District Council on reaching the finals of the inaugural NI Food and Drink Awards with the success of its LegenDerry Food Festival, the Mayor, Alderman Hilary McClintock, said the city’s food tourism offer had gone from strength to strength during Year of Food and Drink 2016, when the city also scooped the accolade of runner-up Ireland’s Foodie Destination for the second year in a row.

“The LegenDerry Food Festival is now firmly established as one of Northern Ireland’s leading platforms for chefs, restaurateurs and producers to showcase their work.

“The event attracted more than 36,000 visitors to the city last year, making it one of the most popular food festivals in Northern Ireland and, it will form part of Council’s St Patrick’s Day Spring Carnival programme again this year for three days, enhanced by musical performances, street theatre and LegenDerry themed family friendly activities for locals and visitors to enjoy on March 17th-19th from 12 noon until 6 pm.”

Aeidin McCarter, Derry City and Strabane District Council’s Head of Culture, said she was also delighted that LegenDerry had been shortlisted in the Awards held to celebrate the achievements during Year of Food and Drink 2016 and praised the dedication and commitment of Mary Blake, Tourism Development Manager and her team in the Council-led delivery of the 12 month campaign.

She added: “The LegenDerry Food Festival is a major initiative based on raising the profile of local food provenance and the producers’ supply chain across all food types.

“The impressive festival marquee will once again host all the action in the kitchen with local restaurants serving up their signature dishes on the Boulevard of Chefs and the Theatre of Food centre stage for live cooking demos by some of the top names in Irish cuisine.

“The LegenDerry Food Fair will be held in the Guildhall’s Main Hall with 20 exhibition stands showcasing a wide range of foodie delicacies and delights.

“Visitors will have the opportunity to sample some of the best local produce and learn more from our regional artisans about food provenance and the importance of loving local.

“We will also have a number of street food traders located in Guildhall Square adjacent to the City Walls.”

The NI Food and Drink Awards judging panel including critic Charles Campion and food author Georgina Campbell, writer of the definitive guides to eating out and hospitality in Ireland, Belfast Telegraph restaurant critic Joris Minne and Professor Una McMahon-Beattie, head of the department of hospitality and tourism management at Ulster University, said they were overwhelmed with the level of entries.

Other local entries on the shortlist include the Foodovation Centre at NWRC in the ‘Growing for the Future’ category and, Sperrin Cycles, Far and Wild in ‘Best NI Tours and Trails’.

Find out more in the run-up to the LegenDerry Food Festival taking place on March 17th-19th including details about the guest chefs and timetable for all the cooking demos at www.derrystrabane.com/food