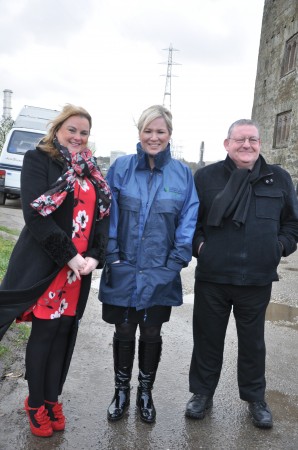 TIME FOR PEOPLE TO HAVE THEIR SAY – O’NEILL

They also met separately with the British Secretary of State James Brokenshire at Stormont House.

Speaking following today’s meetings, Michelle O’Neill said: “We had a full and frank discussion with both governments.

“We made clear that the British government’s failure to honour their agreements and imposing austerity and Brexit against the will of the people, has contributed to the undermining of the political process

“For years both governments have failed to protect, and guarantee agreements made.

“Under the terms of the Good Friday Agreement, they both have responsibility for equality within their respective jurisdictions.

“They have singularly failed to meet those responsibilities and have allowed the DUP to block basic equality provisions for citizens in the north.

“The British government’s approach has to be tackled and that won’t happen unless the Irish government acts to hold them to account.

“There can be no return to the status quo and no short-term sticking plaster. There needs to be equality, partnership, and respect and both governments need to honour their responsibilities in full.

“We again said that we do not yet see any basis for a credible negotiation this side of an election.

“The position is clear. Following the resignation of the deputy First Minister, Martin McGuinness we must move to an election.

“Sinn Féin will, as always be open to dialogue, however talks for the sake of talks will not resolve the outstanding issues.

“Talks alone will not rebuild the confidence in the institutions.

“We need all concerned to live up to their obligations, their agreements and do the right thing by the public. This is the clear position of Sinn Féin.”

TIME FOR PEOPLE TO HAVE THEIR SAY – O’NEILL was last modified: January 12th, 2017 by John